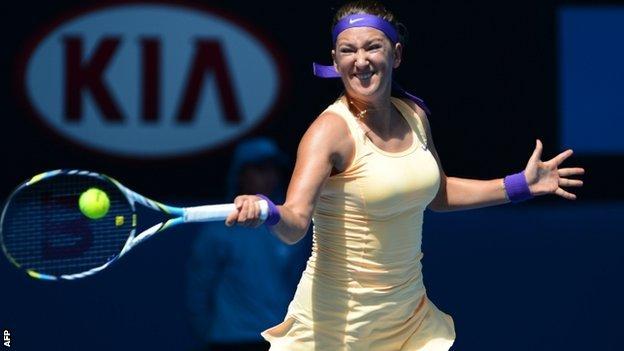 The defending champion powered to victory in 55 minutes to reach the third round. The world number one will next play American Jamie Hampton in the next round.

"I definitely stepped it up from my first match, and I was in the zone trying to execute all of my shots," said the Belarusian. "I was trying to make everything happen, and that's what I'm happy about."

"It was pretty hot. That's why I was trying to play fast. The first match I got a little bit sunburned and you don't want to make that mistake again."

The third seed brushed aside any injury worries as she raced into the third round. The American hurt her ankle in the first round but was moving freely in her victory over the Spaniard.

The only mishap came when Williams hit herself in the mouth with her racquet. "One day I twist my ankle, today I hit myself in the face - I don't know what's going to happen on Saturday," she said.

Williams next plays Japan's Ayumi Morita as she continues her bid for a 16th Grand Slam title and a sixth at Melbourne Park.

Tomic delighted the home fans by beating the German qualifier to set up a potential third-round match with Roger Federer. The 20-year-old exchanged a few words in the media with Federer in the build-up to the tournament, but is unbeaten this year having won his first ATP title in Sydney earlier this month.

Davydenko was brushed aside by Federer in just 119 minutes, with the Swiss master now set to face the last Australian left in the competition, Bernard Tomic.

Robson, 19 on Monday, recovered from 3-0 down in the final set to come though a three-hour thriller.

I was even asked about retiring but I'm only 22!

Murray won in one hour and 41 minutes and will face qualifier Ricardas Berankis of Lithuania in the third round.

Former world number one Wozniacki produced a good display to see off her resilient 16-year-old opponent. Vekic is based in London and is coached by Tim Henman's former coach David Felgate.

"I'm starting to feel seriously old because all the players at a physio session recently were younger than me," said Wozniacki. "I was even asked about retiring but I'm only 22!"

"That was not his absolute best tennis, but you can only beat who is in front of you. Joao Sousa did well hanging in there, but it was an efficient day's work from Andy Murray. He has not played Ricardas Berankis who he faces in the next round, but is such a good tactician on court now, adapting to the opponent across the net."

"Berankis is next in line for Andy Murray and, despite being a qualifier ranked 110, might well prove his first significant test. The 22-year-old's early rise up the rankings was halted by a serious groin injury, but he is back and finding real form."

Qualifier Berankis hammered 25th seed Mayer in straight sets to set up a third-round match with Andy Murray, with whom he practised in Brisbane earlier this month.

"I'm feeling confident at the moment, that's for sure," he said. "I feel quite calm, it's not going to be a big surprise to see Andy Murray on the other side of the net."

The 42-year-old Date Krumm, who became the oldest woman to win a main draw match at the Australian Open when she beat 12th seed Nadia Petrova on Tuesday, set another record with her latest victory.

The Japanese veteran became the oldest player to make a Grand Slam third round since 45-year-old Renee Richards in 1979.

Date-Krumm, who has attributed her longevity to leading a simple life, said she gets a lot of support from fellow players. "Everybody says to me, 'You are crazy'. First word is always, 'You are crazy'. But they support me a lot," she said.

Faltering Frenchman: Serving for the match at 7-6 in the fifth set against Lu Yen-Hsun of Taiwan, Gael Monfils missed his first match point in regulation fashion and then hit four double-faults in a row, part of a total of 29 from the Frenchman in the match. Monfils finally converted his sixth match point with a service winner.

Quote of the day

Laura Robson after her epic win over Petra Kvitova: "I am actually amazed so many people stayed to watch. I thought they would all leave after Federer ['s match against Nicolay Davydenko]."