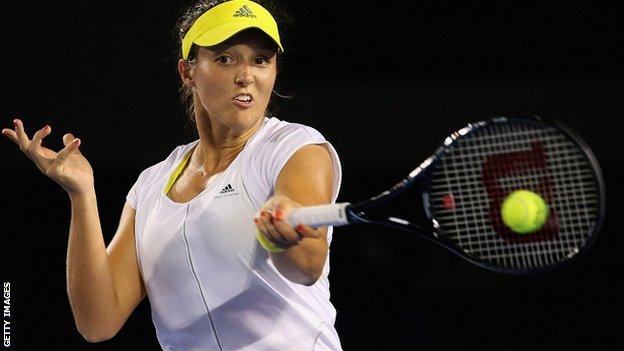 The British number two beat the Czech eighth seed 2-6 6-3 11-9 in an error-strewn but dramatic match that did not finish until 00:30 local time.

Robson, who turns 19 on Monday, recovered from 3-0 down in the final set to join compatriot Heather Watson in the third round.

She next faces American 29th seed Sloane Stephens, with a chance of matching her run at the US Open, where she beat Li Na and Kim Clijsters on her way to the last 16.

"I knew it was going to be a really tough match," Robson said. "I have always struggled against 'lefties' anyway.

"I was just trying to return her serves and it was very hard. But I knew once I got my returns firing a bit and I got a bit more confidence in my serve, I would get myself into the match, and that is what I managed to do."

On a brutal Melbourne day that saw the temperature peak at 40.4C, conditions were still stifling when the pair walked onto Rod Laver Arena at around 9.30pm local time.

It was the first meeting between the pair, whose games are both based around swinging left-handed serves and heavy forehand, and often compared.

Robson played a desperately nervous opening game, double-faulting twice and netting a volley as she was quickly broken to love, only for Kvitova to hand it straight back.

The pattern was set, with Kvitova taking the first set by virtue of making marginally fewer errors and more winners, albeit struggling herself.

Robson levelled with two breaks in the second set as her faltering forehand return began to find its target more regularly, although both players were crippled by service errors.

The match came down to a decider but with the time approaching midnight, and after an hour and a half of largely ugly tennis, a sizeable number of spectators headed for the exit.

They missed out on a gripping finale, a 94-minute final set in which Kvitova opened aggressively and played her best tennis of the match to lead 3-0.

But the double-faults that plagued her evening finally took their toll, two in the fifth game letting Robson back into the set before a repeat performance in the seventh game.

It was Robson who first had the chance to serve out the match at 6-5 up, but Kvitova came out swinging with a drop shot and a thumping return.

After 13 breaks of serve in three sets, the next six games became a shoot-out as the two players showed why their serves can be such devastating weapons, but it was Kvitova who folded once too often.

Her 18th double-fault of the match - to go alongside 18 aces - helped Robson to another break at 9-9 and, cheered on by the majority of the remaining crowd, the Melbourne-born Londoner closed it out to love.

"I don't think that I ever had a worse serve than today," said Kvitova.

The Czech added: "I think that she surprised me with the serve. She's lefty, it's dangerous and I had some trouble with it. She's trying to play very fast and her forehand is good.

"She had a serve for the match and she didn't make it, but she had a second chance and she did it. She did pretty well."

268 comments
Back to top
unknown