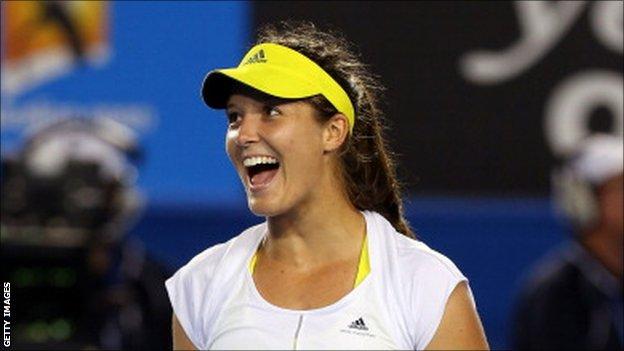 Laura Robson described her late night Australian Open win over former Wimbledon champion Petra Kvitova as one of the biggest of her career.

Robson compared the victory to her wins over Li Na and Kim Clijsters, two other Grand Slam winners, at last year's US Open.

"I think it's right up there with one of the best wins," she said.

Between them, Robson and Kvitova produced 30 double faults and 92 unforced errors over the course of three hours.

"You know it's going to be a pretty ugly match when you start off with two double faults," Robson said.

"I thought 'I've really got to dig in here', and she's never someone who's going to give you a lot of rhythm because she takes the ball so early.

"I just had to try to get as many balls back as I could, and I was pretty disappointed with myself in how I tried to serve out at 6-5 in the third.

"I just gave her a bit too much time on the ball, so to come out with a win is pretty pleasing."

Robson made her second round debut in Melbourne under the lights at the Rod Laver Arena.

"I was super excited for this evening," she said. "As soon as I heard I was playing the night match, I was really excited. I always wanted to play in a night match."

Asked what pleased her most about the performance, she added: "Just that I never gave up.

"Even when she went up a break twice in the third, I just thought I can always break her serve, I just have to get as many returns in as I can.

"In the end I thought I have nothing to lose, so I'm just going to relax on my serve a bit more and just go for it."

Robson, who turns 19 on Monday, will next face American Sloane Stephens, the 29th seed and a friend since junior days.

"She's in good form at the moment," said Robson. "She's a good mover, good ball striker. It's always going to be a tough match but hopefully I can play better than I did today."