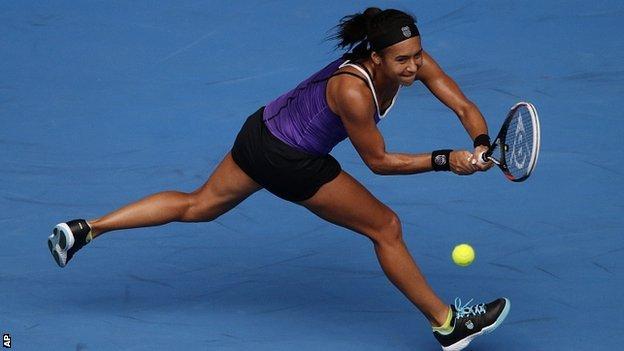 After a strong start, the British number one went down 6-3 6-1 in 84 minutes on Hisense Arena.

The classy Radwanska outmanoeuvred Watson in a match that ended under the roof because of rain, and she will face former French Open champion Ana Ivanovic in round four.

British hopes in the women's singles now rest with Laura Robson, a dramatic late-night winner over Petra Kvitova on Thursday.

Watson, 20, and Radwanska were meeting for the second time after the Pole won for the loss of just two games at Wimbledon last year.

"I thought I had a good start to the match," said Watson. "I had chances early on to break but I wasn't able to convert, and I think after that game that I didn't convert it kind of just slipped away a little bit.

"That's what makes Radwanska so good. She's always there every game, so you can't have a second because she will just take the next few points. I feel like I did a lot better this time than last time, and the score doesn't really show how I felt out there. I felt like I was in it and it was a lot closer."

Radwanska, 23, came into the match on a brilliant run of 11 straight wins and titles in Auckland and Sydney.

One of the smaller players among the top women at 5ft 8in, she thrives through brilliant court craft and movement - a delicate lob on the opening point of the match giving the perfect example.

Watson recovered well from 0-30 with four straight points and engineered the first opportunity, but could not convert from 15-40 in game four.

Radwanska heeded the warning and began to profit from her forehand down the line into Watson's backhand, moving out to a 5-2 lead and, after failing to serve out, breaking for a third time to take the set.

The world number four produced the full repertoire at the start of the second, a deadly drop shot, a stunning reflex volley picked up off her feet and another fine lob all helping her to 3-0.

Watson was hanging on, and got some respite from an unlikely source - rain.

Just hours 12 hours after a scorchingly hot day in Melbourne, the skies darkened and umbrellas went up around the arena as play was briefly halted for the roof to be brought across.

It did not disrupt Radwanska's rhythm one bit, however, and she broke immediately on the resumption thanks in part to another of those deadly forehands.

Watson got on the board in the second set with a hard-fought service hold in game six and kept battling, as expected until the very end, but Radwanska closed out from 15-40 to end the Briton's promising week.

"In the beginning of the first set I was really tight," said Radwanska. "I think that game when I was serving when it was 2-1, I think it was a really important game. The I started to play better."

Ivanovic, who spent 12 weeks as world number one after winning the French Open in 2008, beat fellow Serb Jankovic 7-5 6-3.