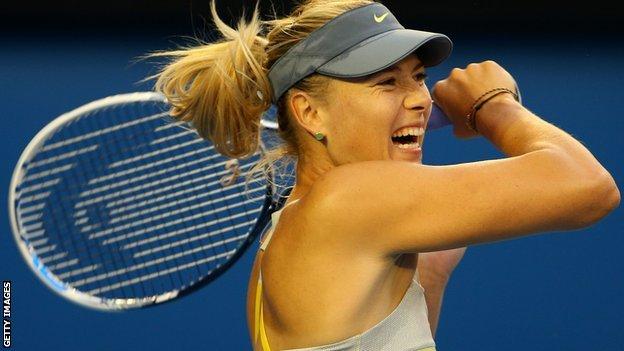 The Russian, 25, hammered the American seven-time Grand Slam champion 6-1 6-3 in only 76 minutes, and has lost just four games in three rounds.

Next she will meet Belgian Kirsten Flipkens in the last 16.

"I was a really determined player out there because I knew the tennis that she's capable of producing and playing," said Sharapova.

"Despite what she's ranked or seeded, it doesn't matter when you go out on the court. She's been there.

"She's experienced enough to know no matter if you're playing the third round, the quarters, or the final, you have to be ready. I certainly was. Since the draw came out, I was really looking forward to that match-up."

The one-sided nature of the contest was a marked contrast to the previous night's epic between Laura Robson and Petra Kvitova, as Sharapova was ruthless from the outset.

Williams, 32, might be a fading force in terms of Grand Slam results but she actually rose from outside the top 100 to end 2012 ranked 24th, having comeback from a seven-month absence due to Sjogren's Syndrome.

Taking on the world number two and French Open champion at a Grand Slam showed just how far she has fallen behind the very best, however.

"She played very well," said Williams. "I expect her to play well.

"I was definitely not my best day today but, you know, there's always other days to play better. I just had a lot of errors. That never helps."

In a positively chilly 21C, compared to highs of 40C on Thursday, Sharapova stormed into a 4-0 lead.

Williams was struggling on her forehand side under the barrage, but found a cross-court winner to finally snap the streak at 4-1.

Sharapova has made it plain all week, however, that she does not care about the scoreline and simply powered on, wrapping up the first set in 30 minutes.

If Williams was to win, she absolutely had to win cheap points on serve, but Sharapova dominated that department as well with some explosive returning.

Two backhands and a fizzing forehand gave the Russian an early break in the second, and it was a mark of what a no-contest the match had become that Williams received a huge cheer when a running forehand down the line got her on the board in the second set at 3-1.

Sharapova did slip up when first serving for the match, but it raised eyebrows more than alarm bells and gave the willing crowd a chance to enjoy a few more good moments from Williams.

A rasping forehand winner and an ace bookended the final game as Sharapova wrapped up another mightily impressive performance, and she remains a strong favourite to make the final.