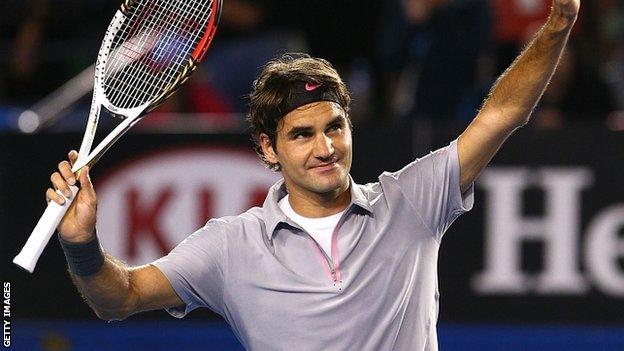 In the women's draw, defending champion Victoria Azarenka survived a scare before edging past American Jamie Hampton into round four.

Murray regularly uses Berankis as a hitting partner and he got a decent workout from the Lithuanian. Berankis is far better than his ranking of 110 (a groin injury has hindered progress) but he gave the third seed plenty to think about and was only let down by the unforced error count - 47. Not the easiest afternoon for Murray but a straight-sets win will do nicely

The Belarusian world number one showed signs of mental fragility at crucial times but came back from a break down in the deciding set to beat the 63rd-ranked Hampton.

The big-hitting Hampton struggled with back pain but led 2-1 in the third before Azarenka won five straight games to triumph in two hours nine minutes.

"She played incredibly," Azarenka said of her opponent. "She went for every single shot. She has a great future in front of her.

"She took a medical time-out but she was ripping winners all over. I thought 'can I have a back problem?!' I was feeling great but missing every shot.

"I don't think it was the best performance, honestly, today; but in another way I can say I can play better, so that's a positive note from there."

Azarenka will next play Russia's Elena Vesnina, who beat Roberta Vinci of Italy 4-6 7-6 6-4.

Five-time champion Serena Williams was in imperious form despite needing to recover from 0-3 down in the second set to win in 66 minutes.

In the process the American set the fastest speed for a serve so far this tournament with a thunderbolt of 207kph (128.7mph) - well clear of Sabine Lisicki's next best effort of 194kph (120.6mph).

The 31-year-old Williams, who won last year's Wimbledon and US Open titles, will next meet 14th-seeded Russian Maria Kirilenko.

"I feel good," said Williams. "I was really focused today, she played well and it was a good test."

The Olympic and US Open champion admitted to struggling and getting frustrated against his hitting partner but kept his composure and worked through the problem to set up a last-16 clash against Gilles Simon.

Milos Raonic has gone top of the ace count with 71, but yesterday's leader Nicolas Almagro (62) will get the chance to regain the lead on Sunday.

There is no surprise that Serena Williams overtook Julia Goerges and Sabine Lisicki (both 21) as she moved to 24 aces.

Who are the top returners of the first serve?

Janko Tipsarevic has won the most challenges in the men's draw with seven, but as he's lost 12 he's down at 28th overall with a success rate of 36.8%

The much-hyped clash briefly caught fire in the second set but ultimately fizzled out under the lights of Rod Laver Arena, as Federer marched to a clinical 118-minute victory.

"It's nice that you guys invite me back every year," said Federer, who was in sublime form. "It's not my favourite part of the job beating up on the home heroes."

Federer next plays 13th-seeded Canadian Milos Raonic as the Swiss legend bids for an 18th Grand Slam title and fifth at Melbourne Park.

The 36th-ranked Chardy upset the former US Open champion in three hours 45 minutes on Hisense Arena, removing a potentially dangerous opponent from Andy Murray's half of the draw.

"I had nothing to lose today so it was easy to play," said Chardy. "I knew that if I wanted to win the match, I had to go for it from the start.

Gilles Simon who came through a remarkable clash with fellow Frenchman Gael Monfils 6-4 6-4 4-6 1-6 8-6 to set up an encounter with Andy Murray.

The four hour 43 minute contest saw both players struggle physically with Simon receiving treatment for quadriceps and arm problems and Monfils for blisters on his racquet hand.

Having relinquished a two-set advantage, Simon had the chance to serve for the match at 5-4 in the fifth only to be broken. He hit back and did not miss the chance when it came again at 7-6.

"I was almost dying at the end of the second set, it was already two hours long and I thought it would be difficult," said Simon.

The British number two, who turns 19 on Monday, was beaten by the American 29th seed after being treated several times for a shoulder problem on Court Two.