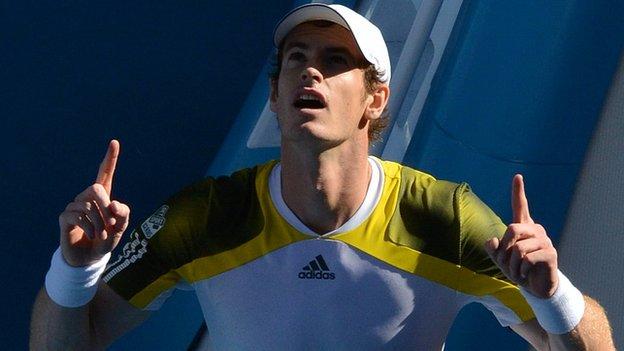 Andy Murray made it through to round four of the Australian Open with a scrappy straight-sets win over Ricardas Berankis.

Scheduled third on the main court, Murray and Berankis stepped into action at 3pm local time in a breezy 22C - a far cry from the near 40C of their previous matches.

The pair are regular practice partners, and the familiarity appeared of greater benefit to the outsider.

After offering up an immediate break with four loose forehands, Berankis began to make inroads into the Murray game with some heavy hitting.

The problem for the 22-year-old was that, for every flashy winner, there was usually a pair of errors close behind.

Murray moved into a 5-1 lead without exactly hitting the heights, and he stumbled when trying to close out the set by giving up one break and almost letting Berankis right back into it.

Two big serves denied the double break, but a sharp "Come on!" suggested relief from Murray after a set that saw him face eight break points and earn only two.

Berankis continued to make shorter work of his service games in the second set, Murray angrily swiping his racquet at the court after missing a rare chance to put the pressure on in game five.

The Lithuanian fashioned the first break points of the set and went 4-2 up when Murray netted a forehand, but the mini-crisis drew the required response from Murray.

A beautiful lob recovered the break immediately and the Scot went on a run of seven out of eight games to effectively end Berankis's hopes.

Murray's day was summed up when he failed to serve out the match at 5-4, only to break again in the next game and succeed at the second attempt.

"We know each other's games pretty well, we practise a lot together," said Murray. "He hits the ball very flat and these courts were playing quick today.

"I was struggling. He was making me feel pretty uncomfortable on the court with his style.

"I need to strike the ball better. My timing was off and I was leaving a lot of balls very short and allowing him to dictate some of the points. But hopefully it'll get better in the next round."