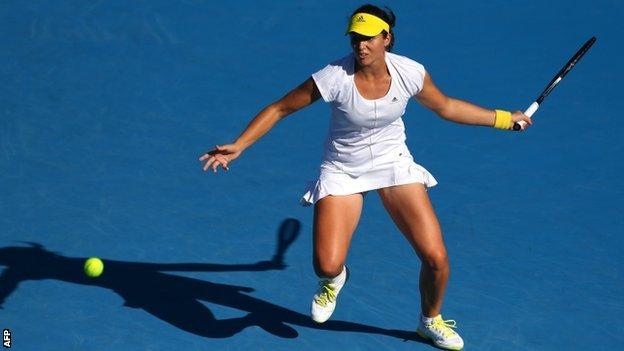 Laura Robson said she had played through the pain after a shoulder injury hampered her in defeat by Sloane Stephens at the Australian Open.

The Briton, who turns 19 on Monday, was beaten 7-5 6-3 by the American 29th seed after being treated several times for a shoulder problem on Court Two.

Robson later revealed that the problem had arisen after practice on Friday.

"I felt something in my shoulder yesterday, but we still don't know what it is because I haven't had time to see the doctor yet," she said.

"But these things happen, and you just have to play through the pain sometimes. But I thought Sloane played really well."

Stephens, 19, will play Bojana Jovanovski in the fourth round after the Serbian beat 42-year-old Kimiko Date-Krumm of Japan.

Robson and Stephens have been friends since the age of 12 after going to the same academy, and the American had won their first senior match in Hobart earlier this month.

That had been in fiercely hot conditions, and Stephens was the steadier player again on a windy Melbourne day as Robson made 47 unforced errors.

Robson had come through a three-hour epic to beat Petra Kvitova in the previous round and she looked to still be suffering the effects at the start.

Stephens raced into a 4-0 lead with a brilliant forehand winner and the Londoner was unable to find her range.

The trainer was called after game five as Robson required treatment on her left shoulder, but she came out firing to level at 4-4.

It was credit to Stephens, who is projected to enter the world's top 20 after the tournament, that she withstood the barrage of hits and misses form the other end.

Robson saved a couple of set points with heavy blows in game 10, but a wayward forehand gave up the set in game 12.

The Briton had made twice as many errors as her opponent and, although the gap narrowed in the second, it was still the more measured Stephens who held sway.

With the shoulder still a problem, Robson fell behind at 3-1 when she netted a half-volley.

Even the vociferous support of most of the Court Two crowd could not help her get back on terms, but there was one final chance when Stephens slipped to 15-40 as she served for the win.

The American held her nerve, however, to see off the danger and convert her second match point when Robson pulled alter forehand into the tramlines.

"Last year, I lost here 6-2 6-0 in the first round," said Robson. "It's a massive improvement. There's still so many things that can be worked on, but I toughed out the two wins.