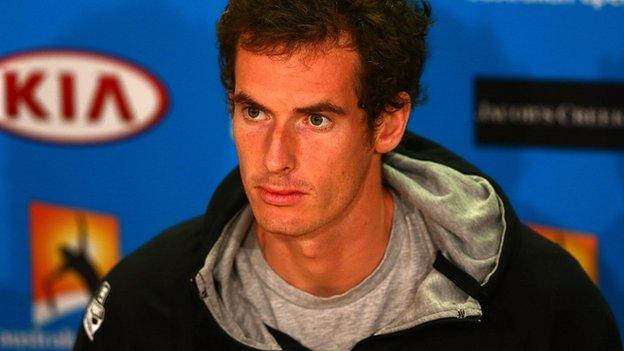 Andy Murray will have everything stacked in his favour when he takes on an exhausted Gilles Simon in the fourth round of the Australian Open on Monday.

The Frenchman needed more than three hours of treatment after his near-five hour win over Gael Monfils on Sunday.

And he admitted: "I will just try to go and take my chance, even if I don't have a lot of chance to win this one.

"But this is my job, to go on the court and to do the maximum to bother him and to give him a hard time."

The pair will meet in the fourth match on Hisense Arena, not before 06:00 GMT, which gives Simon as much time as possible to recover.

He will need every second of it to challenge Murray, who in contrast has made it smoothly through to the last 16 without dropping a set.

To make matters worse for Simon, since he won his first ever match against Murray in 2007, the Scot has reeled off nine victories for the loss of just one set.

When this was put to the Frenchman, ranked 16th, he said: "No, you're right. And I was in better shape when I was going on the court."

If Simon is playing down his chances, Murray will still hope to improve on his third-round match against Ricardas Berankis.

Despite the straight-sets scoreline, it was a patchy performance from the Briton, who said afterwards: "My timing was off and I was leaving a lot of balls very short and allowing him to dictate some of the points."

Asked how he would go about rediscovering his timing, Murray explained: "By playing matches and winning, that normally helps. All of the courts at the slams play differently normally. You know, very rarely do you get two courts that play exactly the same.

"But we hit enough balls and practice enough that that shouldn't be a huge issue, at the beginning of the match, to get used to the court again. But normally you find your timing by practising a lot and then getting used to the conditions and the tournaments you're playing."

Murray last played Simon in Miami just under a year ago, winning in straight sets to extend his record against the Frenchman to 9-1, but he will not be taking the former world number six lightly.

"He's caused guys lots of problems before," said Murray. "He pushed Roger to a very tough five set match here [in 2011]. He's getting closer to the top 10 in the world. He had his own injury problems as well."

And while Murray is focused on his next match, the defeat of sixth seed Juan Martin del Potro by Frenchman Jeremy Chardy has removed one possible major obstacle at the quarter-final stage.

"I would say it was a surprise," said the US Open champion. "He was the favourite for the match, but often there's surprises in Australia, at this event. It's the first tournament he's played this year."