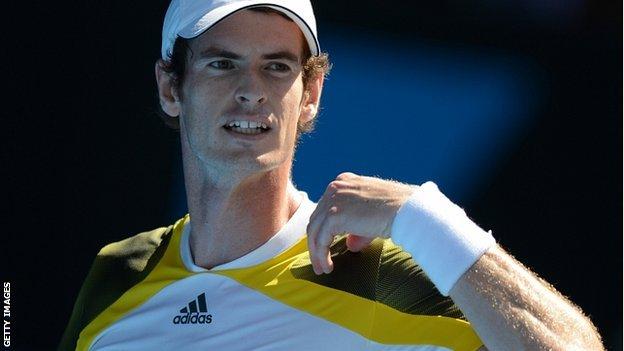 Britain's Andy Murray is through to the quarter-finals of the Australian Open as he looks to win his second Grand Slam title.

The US Open champion took time out between matches at Melbourne Park to answer some of your questions.

If you weren't a tennis player what do you think you would have become? Llewelyn Screen

"Who knows, for sure something in sport. I played all sports when I was younger, so I would have been a sportsman of some sort."

What do you do in your free time? Daniel Lara Macias

"It depends where I am. When I'm in Miami I like to go and watch basketball, the Miami Heat. When I'm at home, I enjoy going go-karting. And yes, I am as competitive as on the tennis court. Maybe more so."

"That's a tough question, because it's kind of suggesting the fish you get with fish and chips. I would never have battered fish, like cod from the chip shop. So I'll go for chips."

Have you devised a Mobot-like celebration if you win the Australian Open? Iain Beddow on Twitter‏

"Er, no. I really enjoyed watching Mo Farah wins his golds though; I was at home to see the first gold he won on the same night as Jess Ennis and Greg Rutherford. I was getting ready to play in the final the next day. I think a few months after the Olympics he might have thought, 'Why did I do the Mobot?' Everyone was getting him to do it! But it was good fun."

Which former player would you most like to have had a chance to play? Simon Preece

"My coach, Ivan Lendl. No question. I hadn't watched many of his matches until I started working with him, then I started to watch some videos of his big matches. Now that I know him and have watched him a lot, he would be the most fun guy to go play. He was incredibly consistent, very rarely played a bad match, he did everything well - served well, good forehand, passed well, moved well.

"He improved his volleys a lot towards the end of his career as well to try and win Wimbledon. That was the sort of guy he was. He could have won more Slams, for sure. He missed a French Open to prepare better for Wimbledon, and when he started playing the Aussie that was on grass too. If the Aussie was on hard courts, I think he would have won more. Would I have beaten him? Depends on the surface. I think on clay he would have beaten me, on grass I think I might have beaten him and on hard courts... it would have been a good match!"

How many sugars do you have in your tea? Jack David Evans

"None, because I never drink hot drinks - no coffee or tea for me."

Am I your favourite Hibs player of all time Andy? #ishouldbe Joe Tortolano ‏on Twitter

"You played for Hibs, Joe, so that means you must be decent (smiling), but my favourite Hibs player of all time was Franck Sauzee. He was really good, and he managed Hibs as well as playing for Milan."

How can I improve my two handed-backhand? Mark Woods

"Repetition. If you can get somewhere with a ball machine then just hit 100 of the same backhands, and change position and do it again. Do 100 higher ones, 100 lower ones, just so you hit a lot of different shots. That's what I would suggest."

What is your ultimate aim this year? Winning another Slam? Winning Wimbledon? Or attaining the number one ranking in the world? Victor Chatfield

"A Slam. Any one of them would be good."

What music do you listen to in preparation for a game? Rihadul Islam

"I don't really listen to music any more, so literally anything that's on the radio. I love listening to Ed Sheeran, I listen to him a lot, but I haven't listened to anything before my matches here."

"Jam and fish fingers? Recently I've been having spicy Mexican chicken, it's really good. That's what I'd go for. I had fish fingers when I was a kid but haven't had them for ages."

Did Lennox Lewis try and deck you after you laughed at him during BBC Sports Personality Awards? PRN Europe Sports