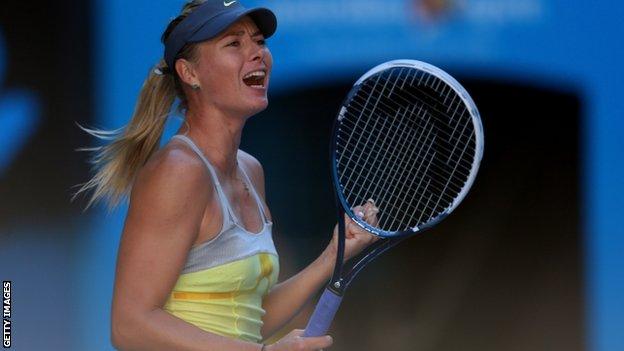 Maria Sharapova maintained her impressive form to cruise through to the semi-finals of the Australian Open with an emphatic victory over fellow Russian Ekaterina Makarova.

She will face China's Li Na, who knocked out fourth seed Agnieszka Radwanska in straight sets.

Defending men's champion Novak Djokovic saw off Tomas Berdych to set up a semi-final clash with David Ferrer, who fought back from two sets down to beat his Spanish compatriot Nicolas Almagro.

Li ended fourth seed Radwanska's 13-match winning streak to the start of the year with a straight-sets victory that put her into the semi-finals.

Novak Djokovic has now spent 13 hours and eight minutes on court in his five matches.

David Ferrer won his first tie-break at the Australian Open since 2004 as he fought back to beat Nicolas Almagro. He'd lost 13 in a row.

More bad news for Almagro as he failed to regain top spot in the ace count. Today's 15 took him up to a total of 83, behind Milos Raonic on 90.

Radwanska had not lost a set in 13 matches coming into her quarter-final, having won tournaments in Auckland and Sydney before Melbourne.

In a match featuring 10 breaks of serve, the sixth seed won an unpredictable first set lasting 66 minutes and claimed five games in a row from 0-2 down to take charge of the second.

The Chinese player broke Radwanska's service in the sixth game of the second set without losing a point and fended off two break points when serving for the match to prevail in one hour and 42 minutes.

The world number six, formerly coached by her husband Jiang Shan, praised the input of her new coach Carlos Rodriguez. "I think it was pretty good for me and my husband. It is much easier for our life. We don't have to shout at each other on the court and also off the court," she joked.

"I really don't know what it is here," the sixth seed added. "It seems whenever I come down here my results are always quite consistent, no big setbacks or anything.

"I'm not sure whether it's the winter training but it does seem like I'm just better at this tournament."

Li, who lost the 2011 final to Kim Clijsters, will face Maria Sharapova in the last four.

Ferrer fought back from two sets down to overhaul his Spanish Davis Cup team-mate in five sets and reach the semi-finals.

World number two Sharapova demolished her fellow Russian to set a record for the fewest games lost in reaching the semi-finals.

The former champion has lost just nine games in the tournament so far to beat Monica Seles' Australian Open record of conceding only 12 games before the semis.

Sharapova, who won her first two matches 6-0 6-0, and then beat Venus Williams 6-1 6-3 and Kirsten Flipkens 6-1 6-0, broke her fellow Russian's serve five times and hit 22 winners as she clinched victory in one hour and six minutes.

"I don't want to give my opponents the chance to test me," she said. "Do I want them to test me? Would I prefer that? Absolutely not."

Defending champion Djokovic returned to action 48 hours after his epic five-hour win over Stanislas Wawrinka and showed no ill-effects as he brushed aside the fifth seed to reach the last four.

British junior Dunne reached the third round of the girls' singles with a straight-sets victory on Court 22 before joining her American partner in the doubles.

The British number one will take on Chardy for a place in the semi-finals in the third match on Rod Laver Arena on Wednesday.

Li Na has been explaining how her husband, and former coach, watched a winter training session with her new coach. "I was doing some exercise with Carlos. He was sitting in the gym. After halfway, he was like, "Are you finished?" I said, "No, only halfway." He said, "What?" I said, "Really, yes. I do this for three days already."

Confectionary entrepreneur Maria Sharapova says her WTA colleagues are not taking too many of her new brand of sweets. "Mostly the ATP players are taking them. It doesn't seem like they have any diet restrictions. I think the girls are very cautious with the sugar. The guys, they don't care."