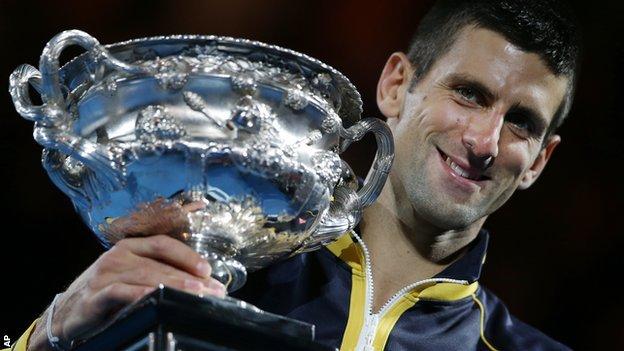 Novak Djokovic's Australian Open victory over Andy Murray will not be remembered as one of the greatest Grand Slam finals.

But with backhands and blisters, forehands and feathers, it certainly had lots going for it.

The latest instalment of tennis's top-of-the-world rivalry delivered for more than two hours, full of fire and attrition, only to tail off during a low-key third set and one-sided fourth.

'Classic' status is therefore not warranted, but that's only based on the standards set recently by the top guys. It was still pretty decent!

And here's the point. So spoilt are we with the quality of play and quantity of sensational matches, sometimes a reminder that tennis is not immune from human fallibility and physical fragility is welcome.

2011 US Open against Rafael Nadal

If every match is a classic we get complacent. We turn on, as a viewer and listener, and expect the best. When it doesn't happen, we sniff anti-climax and mope around like a kid with nine Christmas presents, disappointed not to receive a tenth.

Late on Sunday night, Murray looked a beaten man towards the end of the final, in the same way Federer faded in the semi-final. Expecting these guys not to suffer into the fourth hour of intense sporting combat is to suggest they are robotic.

Earlier, Murray had been distracted by the flight of a wispy feather. Locked in the second-set tie break, he paused between first and second serves, removed it, and double faulted.

Was this not a very human, half-expected, reaction to an inopportune disruption?

Frailty is an endearing quality and helps keep this golden era on a semi-believable level.

So after the strong start for Murray did the match flutter and turn with feather-gate, as many are suggesting? Not in my mind. Yes the double fault meant a point against serve in a crucial tie break he ultimately lost, but it would be ridiculous to suggest this single point, whatever the circumstances, cost Murray the match.

Nor would it be right to blame the gruesome blisters which received such close-up prime-time BBC1 coverage. Murray was going to call the trainer at the end of the second set regardless of the score. He's had worse and, while painful, the blisters didn't stop him running as usual.

More relevant is the break of serve late in the third set which, remarkably, was the first of the match.

Winner for the fourth time in Australia - three in a row, an open era first - Djokovic is a worthy champion and remains the undisputed world number one. He was involved in the match of the tournament, the colossal battle with Stan Wawrinka on the middle weekend, and produced the devastating performance of the tournament, his ruthless demolition of David Ferrer in the semi-finals.

As for Murray, the progress he's made in the last six months is so glaringly obvious that there's no need for the mood to be anything other than upbeat. A first Wimbledon final,Olympic Gold, a first US Open title and a third Australian Final is a fine return for six months work. What amazing things he is doing! The abuse he continues to receive (in thankfully ever diminishing circles) sounds more and more embarrassing and misplaced.

Sitting in the press conference chair in the early hours of Monday, he judged this mood perfectly. Disappointed, for sure, but not despondent. Sometimes, on these occasions, we need to tip-toe around with our microphones, not really knowing what to say, but this was different.

He takes heart from Melbourne with a five set semi-final success over Federer, his first win over the Swiss Master at a Grand Slam, his immediate, positive response to losing the two tiebreaks in that match, and the fact he felt comfortable and relaxed on the big occasion - blatantly not the case in the past.

Most international analysts suggest that Murray is now the second best player in the world. The rankings don't show it yet but it's surely only a matter of time before they do.