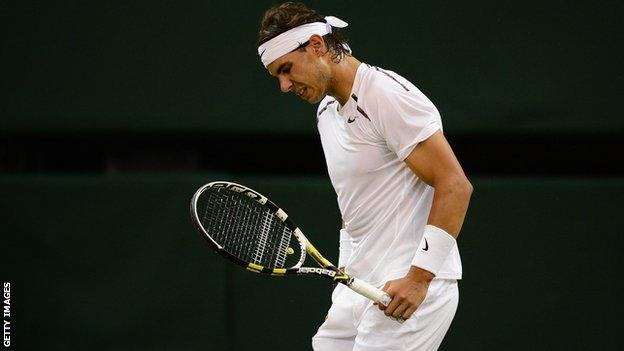 The last time we saw Rafael Nadal competing on a tennis court, he was the victim of one of the biggest shocks in the sport's history.

"I feel very well mentally but physically I need to rest," was the 26-year-old Spaniard's reaction after suffering a surprise second-round defeat by world number 100 Lukas Rosol at Wimbledon.

In the event, a knee injury led to an enforced absence that will finally end, after 222 days, when Nadal steps onto the clay courts of Vina del Mar in Chile to play doubles on Tuesday.

The 11-time Grand Slam champion, who missed 10 weeks in 2009 with a similar injury, will then resume his singles career 24 hours later.

Three weeks after his Wimbledon defeat, Nadal pulled out of the Olympic Games with tendinitis in his left knee, and in September he announced that he had a partially torn patella tendon.

"The tendon is like a big thick rope made up of lots and lots of strands," said Lee Herrington, physiotherapist with the English Institute of Sport and senior lecturer in sports rehabilitation at the University of Salford.

"What can happen over time is some degeneration of the tendon, known as a tendinopathy. That rope can fray because, in a sport like tennis, you have quite high stress through the tendon as you stop and start very suddenly.

"Little bits of that rope fray and then tear, and if it's not given time to repair it will get more and more frayed until eventually you end up with the partial tear."

Surgery was quickly ruled out and the plan was to give the tendon time to repair, while gradually building up strength through physiotherapy, hydrotherapy and laser treatment.

14 July: Pulls out of an exhibition match with Novak Djokovic because of tendinitis

5 February, 2013: Nadal to return alongside Juan Monaco in the Vina del Mar doubles before playing his first singles in seven months

"We believe that within two months the tendon will be in what we consider a normal state," the Spanish tennis federation's doctor, Angel Ruiz-Cotorro, said in September.

Nadal returned to the court on 20 November, when he trained in front of the media in his home town of Manacor, Majorca.

Herrington said: "If you have a basic tendinopathy, when a few fibres are damaged, you're still looking at a three- to six-month recovery, because the cells within the tendon are very, very slow at regenerating.

"The secret is to do a progressive loading programme on the tendon to stimulate those cells to the new load.

"You want a relatively short period of rest, and then you need to reload it within the tendon's tolerance.

"That's what can go wrong with athletes - they don't give enough time and sufficient progressive loading stimulus to these cells to allow them to lay down new tissue, which can get stronger and reform the rope.

"That's why it takes a long time."

In October, Nadal confirmed that he would not play in the final two tournaments of the season in Paris and London, admitting it "doesn't come as a surprise", and the comeback was scheduled for an exhibition event in Abu Dhabi at the end of December, followed by Doha and the Australian Open in January.

That plan began to unravel on Christmas Day when Nadal withdrew from Abu Dhabi because of a stomach virus, and three days later he pulled out of Doha and Melbourne.

"My knee is much better and the rehabilitation process has gone well, as predicted by the doctors, but this virus didn't allow me to practise this past week," said Nadal.

Rather than two weeks on the Australian Open hard courts, Nadal would now target shorter events on the more forgiving clay.

Nadal returns in the low-key surroundings of Vina del Mar, the first clay-court tournament of 2013, and will move on to Sao Paolo in Brazil and Acapulco in Mexico. He will be up against the likes of Juan Monaco, Nicolas Almagro and David Ferrer during his 'Latin American Swing'.

Nadal will reportedly return to action with a new racquet and strings that will add "more top spin", according to Eric Babolat from the Spaniard's racquet manufacturer. "He already has a lot of that but he wants more," the Frenchman told the German Press Agency. And there have been changes off the court as Nadal's manager, Carlos Costa, has left leading agency IMG to create a company with Sebastian Nadal, Rafael's father, that will look after the player in future.

Nadal insists it is all about testing the knee at first, rather than results.

"I'm very excited to get back to feeling what it's like to play in a tournament, [but] I do it with the uncertainty of seeing how my knee responds," he said. "I need time for rehabilitation and to see if it holds up to maximum competition."

If he comes through the clay, Nadal will then travel to the United States for a real test of his knee on the hard courts of Miami and Indian Wells, before the European clay-court season that culminates with the French Open in May. Whether he can lift the trophy at Roland Garros for an eighth time will say a great deal about his future prospects.

Despite his long absence, it was only last week that Nadal finally slipped out of the top four in the rankings, swapping places with his compatriot David Ferrer, and there has been little sign of any new threats emerging since he last played.

However, the top three of Novak Djokovic, Roger Federer and Andy Murray have all won Grand Slam titles in that time, and Djokovic and Murray in particular - both a year younger than Nadal - will prove immensely difficult obstacles to overcome for the foreseeable future.

Nadal, who turns 27 on 3 June, admitted only last week that the injury still hurts, saying: "The most important thing for me is whether I can support the pain of the knee."

Herrington said: "The nature of that injury means an athlete is likely to get some pain when they load the knee at competition levels, but I'd be concerned if they were still feeling pain and hadn't done a significant amount of sport-oriented loading in advance.

"The tendon is load-intolerant now, so in a Slam-type tournament over two weeks solid there will be a consequence of that."

However, Nadal can draw some comfort from his period sidelined by knee trouble in 2009 - the following year he won the French Open, Wimbledon and the US Open, and regained the world number one ranking.