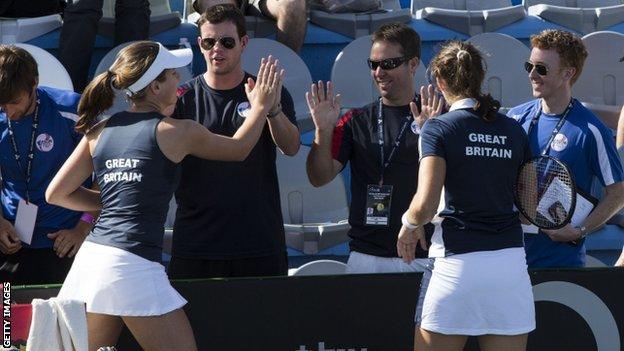 I really couldn't have asked for a better start to my Fed Cup career than a 3-0 win for the team, and a 6-0 6-0 win in my doubles match with Laura.

Anne and Heather did a great job of making sure we got the win over Bosnia-Hercegovina in the singles matches, but Judy said at the beginning of the week that every rubber is really important because of how the scores are tallied up at the end.

So the pressure might have been off in terms of winning the tie, but there was still enough to feel like I needed to perform. I went out there not really expecting too much because I didn't want to jinx anything, but it was a pleasant surprise to do so well.

It was exciting to get out there for real and we didn't lose a game, so obviously it worked out well, and the rest of the team have been saying, 'You're 100%, you're 12-0!"

This is the first time I've been together with the girls as a team but I've known Laura and Heather since we were juniors, and I've been training at the National Tennis Centre for over two years full-time, and in and out for at least the last three years. I've seen Anna and Bally there, so meeting up hasn't been anything new or unexpected.

Actually, there was one step into the unknown as I had to perform in front of the whole team on Tuesday evening as an initiation ceremony for Fed Cup debutantes.

There was a lot of pressure on me to deliver and go out there with a bang, but I really am a terrible singer - I mean really bad - so that was out of the question, and I was wearing the team dress, which is reasonably tight, so ripping that on stage wouldn't have been ideal.

In the end I gave a speech and I'd like to think it was good - my team-mates were very supportive anyway!

We ended up having a bit more time for team bonding than we expected as the weather was rubbish on Wednesday and our first tie against Bosnia-Hercegovina was postponed by a day.

Sixteen teams have been drawn into four groups in Eilat, with Great Britain in Pool B alongside Bosnia-Hercegovina, Portugal and Hungary. The top team from each group will go through to two play-off ties at the weekend. The two winners of those will earn play-offs in April, with the prize a place in World Group II.

We got a practice session in before it started pouring with rain and there were a couple of team meetings during the day to see what the situation was, and then we played a few games.

Laura and I played a Wii dance game - it was the first time I'd ever played it and I was very bad and Laura was extremely good, so we were pretty unfairly matched. In the evening we played Pictionary, the six girls against the six boys here with the team, and obviously the girls won again. Although I probably wouldn't tell you if we'd lost!

That team spirit carried over into the matches as we were all courtside to watch each other and make some noise. I was using a drum that Heather and Laura brought last year, and a few other musical instruments got an outing. I think we made quite an impression.

Next up is Portugal on Friday and we'll only know the line-up when Judy tells us. I hope I play, that would be exciting, but I'll be there supporting either way. It means so much to me after getting my citizenship and passport last year.

You should have seen the moment I got my passport; I literally ran through the office building and stood on the balcony and screamed "I've got my passport!" and got a round of applause.

It meant 100% that I was eligible to play Fed Cup, and then I got nominated, so it's really been one good thing after another. To now be actually playing for Great Britain is the cherry on top of the cake.