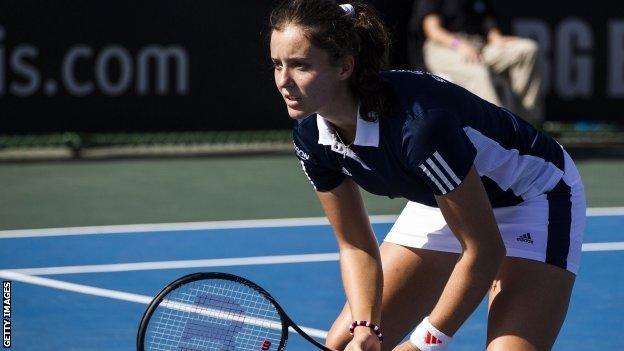 Sometimes I think I get more nervous watching tennis than playing, and it was good to be on court for our decisive doubles match against Portugal.

I started off the day pretty well with a win in the singles and then missed the first three games of Heather's match because I was warming down, but was courtside for the rest of it.

It can be hard watching team-mates during the Fed Cup or the Olympics because it's nerve-wracking, but all we can do is support as best as we can - we have some drums and maracas and we are trying to make as much noise as possible.

The tie came down to the doubles and I thought Heather and I played really well.

We hadn't played together since the Olympics, so that could have been difficult, but we know each other's games really well and we're undefeated in the Fed Cup. I don't think the Portuguese team had played together before, so we were pretty confident.

Although it was a live rubber, I don't think we were too nervous, and it turned out to be a relatively straightforward match. In the end I think it was good that we were able to get some court time together before the tough matches over the weekend.

Friday was the first time I'd played singles since the Australian Open, but I've slowly been building up the amount that I've been training and on Thursday I played doubles, so I was moving full-court again there.

I felt confident enough going on court but I wasn't expecting too much from my game because I haven't practised a lot since Melbourne. I'm happy with the way that it went and I thought I went on court with the right intentions.

I'm feeling good physically despite playing twice in a day, not tired at all, and I'm ready to play twice on Saturday and Sunday if necessary.

Sixteen teams have been drawn into four groups in Eilat, with Great Britain in Pool B alongside Bosnia-Hercegovina, Portugal and Hungary. The top team from each group will go through to two play-off ties at the weekend. The two winners of those will earn play-offs in April, with the prize a place in World Group II.

We've got a physio here, so that's a good addition to the team, and if I didn't feel ready to play all these matches I would have said to Judy last week she should possibly pick someone else. But I always felt confident in my ability to perform.

Our final group match is against Hungary on Saturday, but before then I'm sure we'll relax with some team activities in the evening.

We've been playing a lot of Pictionary and a Wii dance game since arriving in Israel, although Thursday was an early night because everyone was a bit tired as we've been waking up at about 6.15am every morning.

The six girls have an undefeated record in Pictionary to defend against the six boys here with the team, while Heather is definitely the best dancer - she has rhythm the rest of us can only dream about!

One of the best things about the Fed Cup is being part of a team and travelling with a big group of people for once, actually spending time with other Brits, and I hope I get to play many more Fed Cup events in the future.

Even the news that David Beckham has been training at the National Tennis Centre this week hasn't made me wish I was back home.