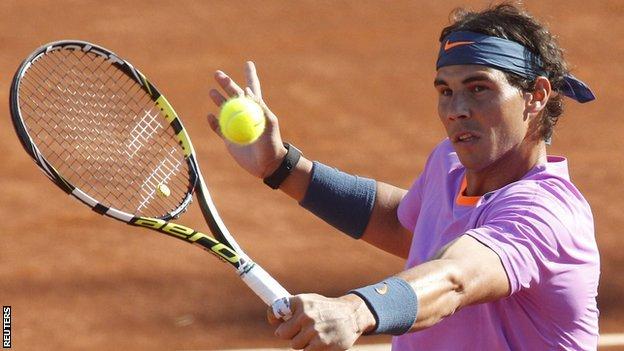 Rafael Nadal's comeback continued when the Spaniard returned to singles action with a 6-3 6-2 win over Argentina's Federico Delbonis at the Chile Open.

It comes a day after a doubles match partnering Argentina's Juan Monaco, Nadal's first match following eight months out with a knee injury.

I'm happy because the knee held up well

Nadal, 26, missed January's Australian Open because of a stomach virus.

The former world number one, now ranked fifth, also missed the London 2012 Olympics and the US Open.

"The beginning was tough and Federico played at a very high level," said Nadal. "I ran a lot and I'm happy because the knee held up well."

Nadal will be involved in doubles action again on Thursday as he and Monaco meet Guillaume Rufin and Flippo Volandri.

Later in the week, Nadal will meet another Spanish player in the singles quarter-finals as he will play either Albert Montanes or Daniel Gimeno-Traver.