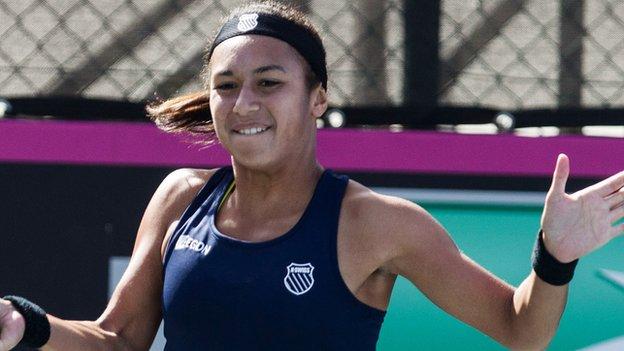 Great Britain began their Fed Cup Euro/Africa Group I campaign with a convincing 3-0 win over Bosnia-Hercegovina in Eilat, Israel.

Laura Robson and Johanna Konta then whitewashed Jelena Simic and Jasmina Kajtazovic 6-0 6-0 in the doubles.

"I was a little nervous but I'm pleased to get my first win," Watson said.

"It wasn't easy, I was in and out of the match as it was the first match, but I'm more settled in now."

After the match, Konta said on Twitter: "Super happy with how my Fed Cup career has started. Hopefully many more wins to come for us! #TeamGB."

Captain Judy Murray hailed the Australian-born 21-year-old's start to the tournament saying: "It was great to be able to put her in on the first day and for her to get her first win.

"She played fantastically well, it was a dream debut for her."

The team faces Portugal on Friday and Hungary on Saturday and, if they are successful, progress to a play-off on Sunday.

Judy Murray's squad are one of 16 sides seeking promotion to World Group II.

The tie was initially scheduled for Wednesday but was postponed for 24 hours due to rain in Eilat.

Great Britain, who made the World Group II play-off last season before losing to Sweden, are seeded second in the qualifying rounds because of the relatively high world rankings of Watson and Robson.