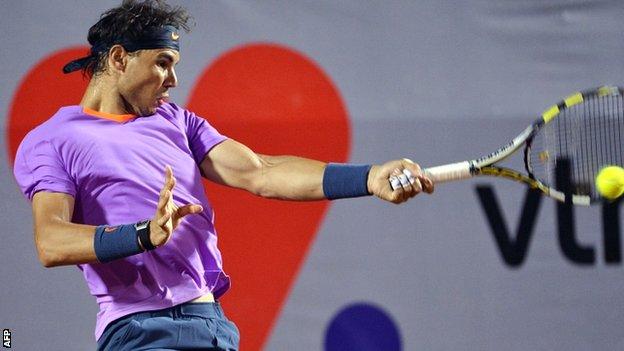 Rafael Nadal continued his return from injury by reaching the final of the Chile Open with a 6-2 6-2 win over Frenchman Jeremy Chardy.

In the final of the clay court event in Vina del Mar, he will play world number 73 Horacio Zeballos.

Nadal, who had beaten fellow Spaniard Daniel Gimeno-Traver 6-1 6-4 to reach the semi-finals, took the first set in little more than half an hour against Chardy, moving his opponent wide with a deep ball to the corner then blasting an overhead winner into the open court.

He broke to love in the third game of the second set, then saved three break points in the sixth game on the one occasion he was put under pressure.

"I played well today, better than the days before, which is important," Nadal said. "I won't compare myself to seven months ago - it's just the first week of competition. It's a great feeling to be in a final match after so much time without playing.

"Tomorrow, it will be a tough match against Horacio, who is playing great tennis. I hope to keep enjoying myself like I've been doing during this tournament and that my physical condition remains good."

The pair have met once, Nadal winning in straight sets at Roland Garros in 2010, one of the seven French Open titles among his 11 Grand Slam triumphs.

Nadal is also in the final of the doubles and will partner Argentine Juan Monaco against Italians Paolo Lorenzi and Potito Starace.

Nadal is playing in his first tournament since a shock second-round exit at Wimbledon to Czech journeyman Lukas Rosol in June.

A torn tendon and inflammation in his left knee kept him out of the London Olympics and the 2012 US Open, while a virus delayed his intended return at the Australian Open last month.

The Spaniard plans to compete on clay in Brazil and Mexico before playing ATP Masters hard-court events at Indian Wells and Miami and then heading to Europe for clay events in Monte Carlo, Barcelona and Rome culminating in the defence of his French Open title.