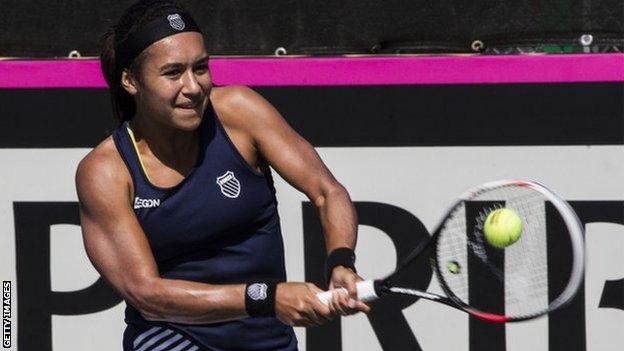 Robson recovered from a disastrous first set and a problem with a shoulder injury, which needed the trainer to be called, to beat Greta Arn 0-6 6-2 6-1.

Watson swept past Timea Babos 6-3 6-2 before Robson and Johanna Konta lost in the doubles as the tie finished 2-1.

GB will now play Bulgaria in the play-offs on Sunday.

After the first set I thought, this can't get any worse

The winner will earn a World Group II play-off in April, which could be Britain's first home tie for 20 years.

Great Britain captain Judy Murray is predicting a difficult tie against Bulgaria, who will have former Wimbledon semi-finalist Tsvetana Pironkova in their team.

"It was great to establish a winning lead after the singles against Hungary today although we got off to the worst possible start when Laura lost the first set 6-0.

"But she made a remarkable recovery to win in three and Heather found some of her best form to beat Timea Babos in straight sets."

After victories in their first two matches against Bosnia-Hercegovina and Portugal, British hopes of topping the group were high.

But Robson was out of sorts in the opening set against a player ranked 93 places below her at 138 in the world and needed some treatment at the end of the set for a problem with her left shoulder.

However, she found her rhythm after that and eased through the rest of the match for a 1-0 lead.

The 19-year-old later told British Tennis: "After the first set I thought, this can't get any worse. I regrouped and played better in the second and third sets."

British number one Watson had no such problems against Babos and wrapped up victory in 84 minutes.

"I got off to a good start and even when she got back to 3-3 I kept up the pressure and the second [set] was easier.

"I'm very proud that we're through to Sunday's play-offs."

Hopes of a 3-0 victory were ended when Robson and Konta were beaten 6-4 2-6 6-2 by Reka-Luca Jani and Katalin Marosi.