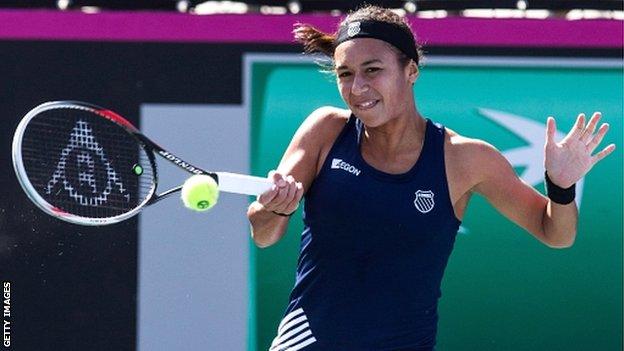 Laura Robson put them ahead with a 6-0 6-4 victory over Dia Evtimova.

British number one Heather Watson lost the first set against Tsvetana Pironkova but captured five successive games on her way to a 1-6 6-4 6-2 win.

On Wednesday, Britain will learn who they face in the Group II play-off on 20-21 April.

World number 45 Robson was quickly in command against Evtimova, ranked 253, taking the first set in 21 minutes.

Evtimova briefly threatened by breaking the Robson serve early in the second set, but the British number two swiftly broke back and finished things off neatly in under an hour, her fifth win out of five this week.

"I definitely played better than on Saturday and conditions were very tough in the wind. Overall I was pleased with my play all week putting the team ahead the three times I played singles."

Watson lost seven games in a row against world number 44 Pironkova but secured her first break of the match in the seventh game of set two and soon took charge of the deciding set, surging into a 4-0 advantage.

Pironkova, 25, broke the Watson serve to get back to 4-2, but Watson promptly broke back then held serve to wrap up the triumph for Britain.

"I was making too many easy mistakes during the first set and I knew in the second I had to make life tougher for her," said Watson.

"Once I got that break in the seventh game I was rolling, and in the third I played really well.

"It means a lot for the whole team to come here and get the job done. We all had a fantastic time on and off the court during the whole week and it was the best Fed Cup experience yet for me."