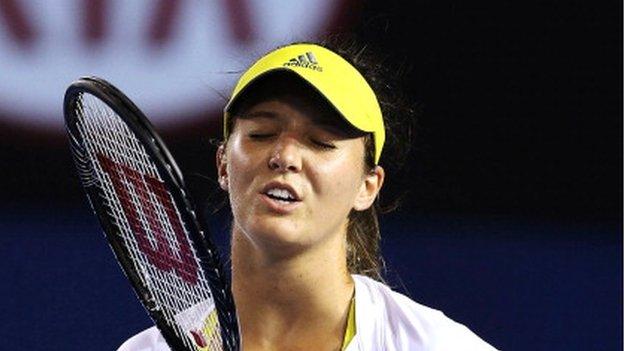 Great Britain's Laura Robson crashed out of the Qatar Open in the first round after a straight sets defeat to Daniela Hantuchova in Doha.

The world number 45 lost 6-4 6-1 to the Slovakian, who despatched Robson in just one hour and 16 minutes including six aces.

British number two Robson, who last week helped Great Britain secure a place in the Fed Cup play off in April, fell victim to some powerful serving from Hantuchova who broke the 19-year-old six times.

Second-seed Williams, who will reclaim the number one position if she reaches the semi-finals, breezed past the 160th-ranked Gavrilova in 54 minutes.

The 15-times Grand Slam winner, who has not topped the rankings since October 2010, showed no signs of the back and ankle injuries that hampered her as she lost in the Australian Open quarter-final last month.

"Mostly I've just been trying to play smoothly and avoid problems, and just do the things I've been working on," said Williams, who claimed last year's Wimbledon and US Open titles.

"Physically I'm feeling better, and hopefully I can stay on that level. Let's go onto the next round now."

French Open champion Sharapova also has a slim chance of returning to the top spot but needs to win the tournament and hope Williams falls short of the last four and current world number one Victoria Azarenka fails to reach the final.

Belarussian Azarenka begins her campaign with a second-round match against Romina Oprandi on Wednesday.