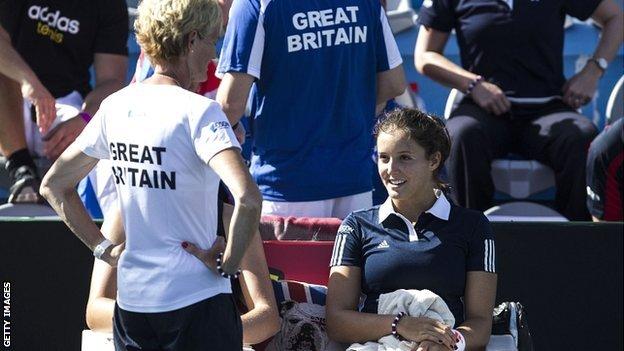 Great Britain's Fed Cup team face an away tie against Argentina in the World Group II play-off on 20-21 April.

They secured their place after winning their Euro/Africa Group I play-off against Bulgaria in Eilat, Israel.

Laura Robson and Heather Watson both won their singles matches against Bulgaria to secure their place.

Victory over Argentina would move Judy Murray's Great Britain side into the Fed Cup's World Group for 2014.

Murray said: "Argentina away on clay will be a tough challenge for us but we have a strong squad and a huge opportunity to grab a place in the World Group. Vamos!"

It is the second successive year Great Britain have qualified for the World Group II play-off.

Last year, they lost 4-1 to Sweden, a result that dropped them back into the qualifiers for this year's tournament.

Murray's side are currently one place above Argentina at 16 in the Fed Cup rankings, with Watson and Robson 41st and 45th in the world rankings respectively.

Paula Ormaechea is Argentina's highest-ranked player at 195 in the world, ahead of Florencia Molinero (214) and Maria Irigoyen (215).