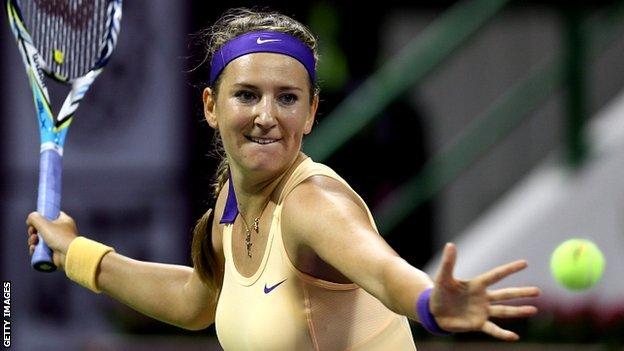 Victoria Azarenka returned to action following her Australian Open triumph with a swift win over Switzerland's Romina Oprandi at the Qatar Open.

Azarenka, the top seed and defending champion, won 6-2 6-3 as she looks to hold on to her world number one status.

Serena Williams and Maria Sharapova both have an opportunity to end the week with the top ranking.

Agnieszka Radwanska, Petra Kvitova and Caroline Wozniacki were among the other winners in Doha on Wednesday.

But Sloane Stephens, the American teenager suffered a bruising loss to Czech Klara Zakopalova, who goes through to meet Sharapova.

Sixteenth seed Stephens served for the match twice and failed to convert four match points before eventually going down 4-6 7-6 (7-5) 7-6 (7-5).

"Today was a tough match,'' Stephens said of the gusty wind. "The conditions were tough but Klara played well. Now I just need to regroup and keep working on my game and get ready for Dubai.'"

Azarenka next faces Christina McHale, the world number 44 from the United States, after working her way into form against Oprandi.

"It was a little bit of a slow start, and I had to adjust. I couldn't go for my shots, and I had to be a bit more patient," said Azarenka.

"She's tricky and plays so many different balls that you don't know what to expect. I had to focus more and move my feet more."

"I've been here and preparing for a few days, but matches are always different than training," said the Swiss. "The ball flies a bit and you have to be prepared."

Britain's Colin Fleming and Jonny Marray beat Stephan Fransen and Wesley Koolhof of the Netherlands 4-6 6-1 10-2 in the doubles.