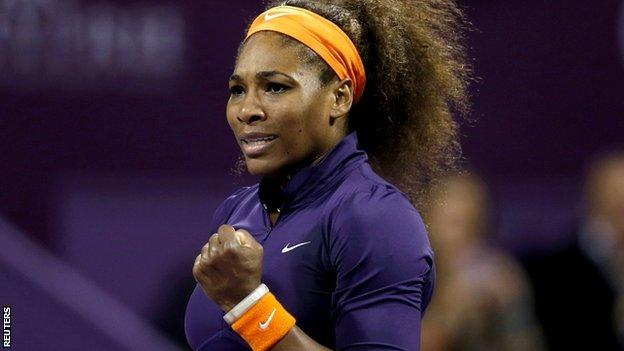 Serena Williams is one win away from reclaiming the world number one spot after beating Urszula Radwanska to reach the Qatar Open quarter-finals.

The American, 31, will go top of the rankings if she reaches the semi-finals and stayed on course to do that with a 6-0 6-3 win against Poland's Radwanska.

Williams will play Petra Kvitova in the last eight on Friday.

Victoria Azarenka and Maria Sharapova both won to keep alive their hopes of ending the week as number one.

Williams is in pole position after winning her third-round match in under an hour, but she played down the significance of potentially regaining top spot after two-and-a-half years.

"I am so over it," she said. "It's like everyone is thinking about it. I have a really tough opponent. It is what it is."

Defending champion Azarenka powered into the last eight with a 6-0 6-0 victory over Christina McHale, while two-time champion Sharapova advanced with a 6-3 6-3 win against Czech Klara Zakopalova.

"Everything was working for me today," said Azarenka. "When I stepped on court I felt my game. When I had a couple of difficult games I stayed focussed and took advantage of that, and that was the key."

Serena Williams will become world number one if she reaches the semi-finals in Doha.

However, Victoria Azarenka retains the top ranking if she reaches the final and Williams fails to make the semis.

Maria Sharapova returns to number one if she wins the title, Williams falls short of the last four and Azarenka fails to reach the final.

She will next meet 10th seed Caroline Wozniacki after the Dane saw off Germany's Mona Barthel 7-6 (8-6) 6-3 in gusty conditions.

"It wasn't great tennis out there today - the wind was a huge factor," said Wozniacki, whose watching father, Piotr, argued with the umpire at one point.

"To be honest it was just about getting the ball in play today. I was just trying to get it in and hoping for the best. It was a struggle, but I got through it."