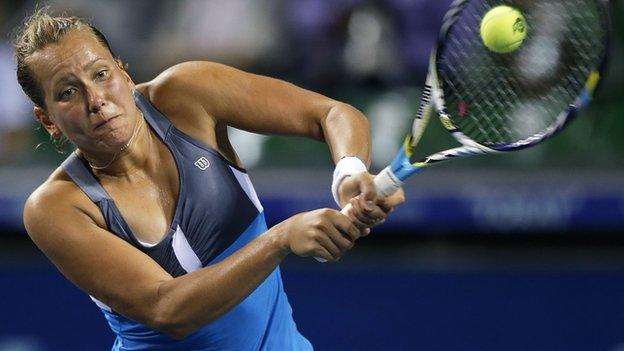 Czech tennis player Barbora Zahlavova Strycova has been given a back-dated six-month ban after testing positive for a banned stimulant.

She claimed the stimulant, sibutramine, had entered her system via weight-loss supplement ACAI Berry Thin and denied any intent to enhance her performance.

Zahlavova Strycova will be able to return to competition on 16 April.

The International Tennis Federation (ITF) said it "did not dispute Ms Zahlavova Strycova's account of the circumstances surrounding her ingestion of sibutramine".

An ITF statement added: "Or that she (a) met the requirements to satisfy article 10.4 of the Programme (Elimination or Reduction of the Period of Ineligibility for Specified Substance under Specified Circumstances), and (b) bore No Significant Fault or Negligence".

Zahlavova Strycova has won one WTA singles and 17 doubles titles since turning professional in 2003. She has reached the third round at all four Grand Slam tournaments and achieved her best ranking of 39 in July 2010.