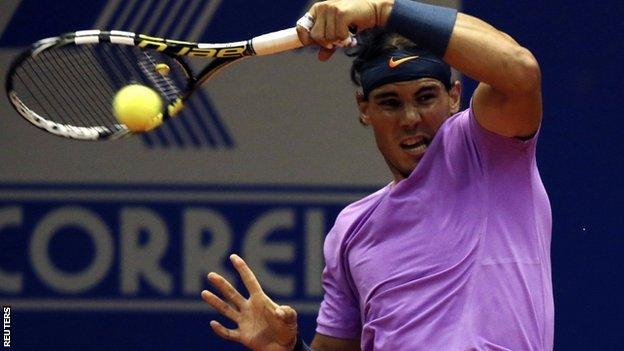 Rafael Nadal beat world number 140 Joao Souza in straight sets at the Brazil Open as he continued his comeback from a serious knee injury.

The Spaniard, 26, won 6-3 6-4 in his opening singles match in Sao Paulo, having played one doubles match before withdrawing to protect his knee.

Nadal had few problems seeing off Souza, and the 11-time Grand Slam champion will next face Carlos Berlocq.

"I was more or less OK - I'm in a process of recovery," said Nadal.

"The important thing is to have regularity, to be able to compete. I am confident that with the days and weeks, I will regain what I am missing."

Nadal was looking to build on his first tournament in nearly eight months last week in Chile. He came through three singles matches before the world number 73, in Sunday's final.

He was still well short of his best against Souza in front of a packed crowd in Sao Paulo, but when he came under pressure early in the second set, Nadal saw off the break point with a first serve.

Two fizzing forehands hooked down the line helped him break at 4-4, and the former world number one served out the victory after one hour and 19 minutes.

Nadal later criticised the playing conditions at the event.

"It's the fault of the ATP for allowing play with a [tennis] ball of poor quality. The ATP does not have the capacity or the infrastructure to be able to analyse the conditions before the tournament begins."

Second seed Almagro is trying to win the tournament for the third year in succession, and fourth time in total.

"I'm happy," said the Swiss, 31. "Things are obviously pretty quick indoors. Thiemo can serve well and he is very talented, so it is a good victory for me."

Britain's Colin Fleming and Jonny Marray led third seeds Robert Lindstedt and Nenad Zimonjic 6-4 1-0 in the doubles when they were forced to retire because of an injury to Marray.