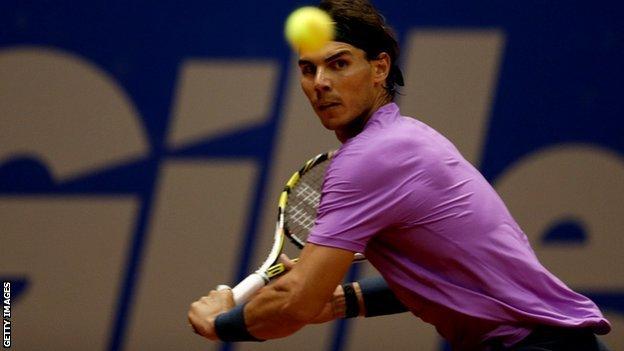 Rafael Nadal beat Argentina's Martin Alund at the Brazil Open to reach his second successive final since returning from a serious knee injury.

28 June 2012: Nadal loses to Lukas Rosol in second round of Wimbledon

"It was the worst day for my knee, and if the knee is not well it makes it very difficult to play,'' Nadal said.

"But I am happy with the result. After seven months without playing it's good to reach the final again, even if I'm not at my best," added the 11-time Grand Slam champion.

The 26-year-old, now ranked fifth in the world,

He now has another chance to win his first title since claiming a seventh French Open victory last May, with Nalbandian standing in his way after the Argentine beat Simone Bolelli 6-3 7-5 in the first semi-final.

"I don't think I am the favourite at all," said Nadal. "The conditions are much more favourable for David. I still have discomfort. Today the knee did not respond well, and in those circumstances, not being able to move well, to attack the ball, it will be very difficult.

"I am going to do what I can but I think it is going to be a very complicated match for me."

In Rotterdam, Julien Benneteau followed up his win over Roger Federer by beating fifth seed and fellow Frenchman Gilles Simon 6-4 7-6 (7-2).

"It was a bit of surprise that Roger went out but it doesn't please me as I don't pay any attention to the other half of the draw before the final," said Del Potro.

"It doesn't matter who I play tomorrow, I just have to stick with my game plan and play it hard."