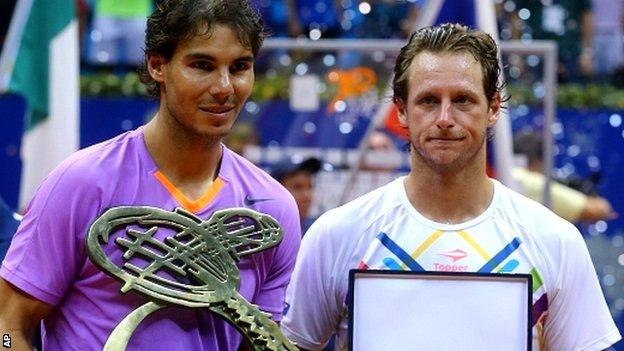 Rafael Nadal won his first title since last year's French Open as he saw off David Nalbandian in straight sets in the final of the Brazil Open.

The Spaniard, playing only his second tournament following beat Nalbandian 6-2 6-3 in Sao Paulo.

Nadal broke twice in the first set and recovered from 3-0 down in the second to win in one hour and 18 minutes.

He is next scheduled to play at the Mexican Open, starting on 25 February.

The 11-time Grand Slam champion has chosen to return to action on the clay courts he favours, making the final in Chile last week before

And while his form remained some way short of his best in Sao Paulo, the 26-year-old was well satisfied at ending the week with his 51st tournament victory.

"I'll definitely enjoy this one because of all the problems that I've gone through with the knee," said Nadal, who also won the Brazil title in 2005.

28 June 2012: Nadal loses to Lukas Rosol in second round of Wimbledon

"When I won for the first time here I was just starting and hopefully this will mark a new beginning."

Nalbandian admitted: "I didn't play my best match today, Rafa was much better. I was ahead in the second set but I couldn't take advantage of it."

Nadal said after his semi-final that the knee was still troubling him and that was again the case against Nalbandian, who was making his own return from an abdominal injury in Brazil after six months out.

"When the knee is feeling better like today I feel like that I can do more of the things that I used to do my entire life," he said. "If the pain is bearable like it was today, then it's fine."

Asked whether he feels ready to compete with the top three of Novak Djokovic, Roger Federer and Andy Murray, Nadal said: "We are going to see how the knee responds and then take stock.

"I don't have any problem playing against better rivals because I accept that I can lose. Losing is not a problem for me. I just need time to continue improving and return to a more competitive level."

Nadal will be targeting an eighth French Open title in June, but for now his goals are simple: "I am going to think about Acapulco and nothing else."