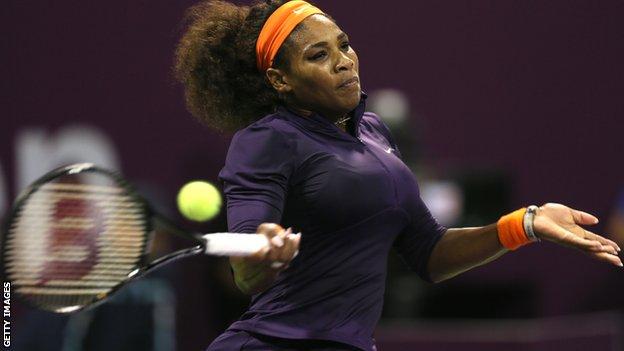 Serena Williams has been confirmed as the oldest woman to reach world number one at the age of 31 years and 145 days.

The 15-time Grand Slam winner last held the position in October 2010 before a serious foot injury.

Williams back at the top

Williams replaces fellow American Chris Evert as the oldest woman to be number one - Evert held the top ranking in 1985 just before turning 31.

Williams missed almost a year on the tour after winning Wimbledon in 2010, when she cut her feet on broken glass and required two operations on her right foot, before suffering blood clots in her lungs.

She slipped as low as 175th in the rankings but in 2012, her first full season back on the tour, she won Wimbledon, Olympic singles gold, the US Open and the WTA Championships.

And she confirmed her return to top spot by reaching the semi-finals of the Qatar Open. Despite losing in the final to Azarenka, Williams had amassed enough rankings points to overtake the Belarusian.

Azarenka ended a run of nine consecutive defeats against Williams with a 7-6 (8-6) 2-6 6-3 victory to take the title.

This week both players are in Dubai for the Duty Free Championships and are seeded to meet again in Saturday's final.

Williams's coach Patrick Mouratoglou, who said "it was a bit shocking" that Williams had not become world number one sooner given her achievements in 2012, believes she can go on to match legends Martina Navratilova and Chris Evert, who both won 18 Grand Slam singles titles.

"That's her main motivation and I think she will keep that," Mouratoglou said.

"I don't think it's hard, but she needs a few things. She needs to stay healthy first, because at 31 that's something really difficult.

"So the main thing is staying fit and the motivation. If she does those two she'll keep on improving - if she wants to. If she achieves both, I think she can still win more Slams. Why not 18? She's not that far from 18."

Britons in the rankings