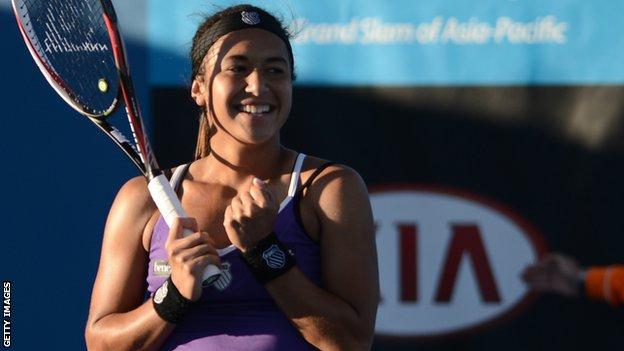 British number one Heather Watson came from a set down to beat Andrea Hlavackova and reach the quarter-finals of the US Indoor Championships.

Watson, the number four seed, needed one hour and 55 minutes to wrap up a 2-6 6-0 6-3 second-round win over her Czech opponent in Memphis.

Victory came three days after a marathon match against Kazakhstan's Galina Voskoboeva in round one.

Hlavackova, who had beaten Watson just once in their previous three meetings, gained two breaks of serve from three break points to take the opening set.

But Watson, ranked 41st in the world, responded by winning the second set to love as Hlavackova, 26, faltered on her first serve.

Hlavackova, the world number 68, was then broken at 2-2 in the decider before Watson sealed victory.

"I started a bit sluggish, but Andrea was playing very well," Watson told the WTA website. "She was hitting good shots, but I was able to find my game around 4-0 and from then on I started playing better and stayed on top."