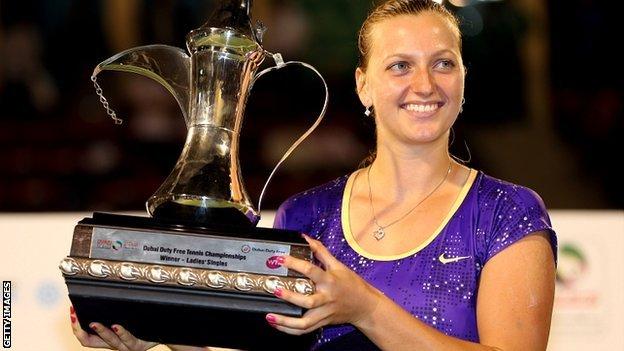 Top seeds earlier in the week.

I am here alone. Sometimes it is difficult to go on court and think about the game by myself

"It was up and down, but I can say I was focused and calm, which was important after the second set," she said.

"It was important to stay in the game and to do my best and to be aggressive."

Kvitova's victory was achieved without the presence of her coach David Kotyza, who was on holiday.

"I hope he is happy," she said. "It was something special. I am here alone. Sometimes it is difficult to go on court and think about the game by myself."

Kvitova won the first four games in 15 minutes and the opening set in half an hour as Errani, the world number seven, struggled to cope with her power.

The Italian had lost all three previous meetings against Kvitova in straight sets, but finally ended that sequence to level the final.

A drop volley and a Kvitova double fault helped Errani break in game four and a run of six straight games put her firmly in control with a deciding set looming.

Kvitova took a comfort break between sets and it proved a wise decision as she came through a mini crisis at 0-40 to make it 2-1, and did not lose another game.

"I was quite down," she said of the decision to leave the court after the second set.

"I mean, I was in the locker room and I was thinking that, really, that I must stay positive - and just play."