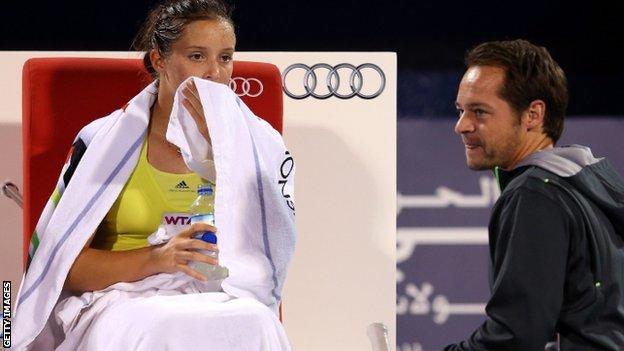 Laura Robson says she has almost fully recovered from a chest infection that has affected her since London 2012.

The British number two revealed she was struggling with the problem, following her defeat in Dubai last week.

"The infection is in the process of clearing up - I'll be fine for Indian Wells in March," the 19-year-old said.

"I've had another course of antibiotics and I'm as good as new. It's always tough playing when you're ill - it was my decision to play in Doha and Dubai."

Robson is looking to compete in Miami and Charleston, before joining her Great Britain team-mates for the World Group II play-off Fed Cup tie against Argentina in mid-April.

Earlier on Tuesday, her compatriot, Anne Keothavong, was knocked out of the first round of the Brazil Cup after a straight-sets defeat by number seven seed Kristina Mladenovic.

Keothavong, ranked 125 places below world number 58 Mladenovic, was beaten 6-3 6-4 by the Frenchwoman.

The loss comes a day after former British number one Keothavong rose two places in the world rankings to 183.

Top seed Venus Williams, the favourite for the title, beat Mirjana Lucic-Baroni 6-3 6-3 in the first round.

Konta beat Swiss Amra Sadikovic 6-2 6-0 in her opening qualifier but lost 4-6 6-1 6-2 to Colombian Catalina Castana in the second qualifying round.