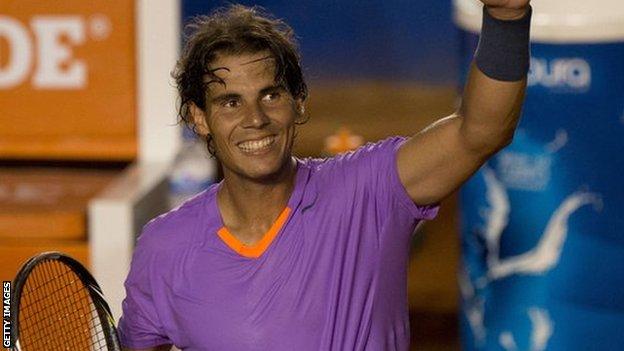 The Spaniard is back in action after taking time off to recover from a persistent problem with his left knee.

The current world number five has been testing his fitness in clay tournaments this month and is scheduled to play in the high-profile Indian Wells and Miami hard-court events next month.

However, the 26-year-old admits that he continues to feel pain in the knee and, while he intends to play at Indian Wells, he has yet to make a definite decision as he continues to monitor the injury day by day.

"My priority today is that the knee recovers 100% and to get back competing and training in full condition soon," he said after his win on Tuesday.

"If that happens the objectives are the same as they have always been.

"If I do not recover, we will take it in our stride, calmly accept it and be positive. We will continue working so that when it's perfect I can get back to competing at the maximum level in a short space of time."

Nadal is scheduled to play an exhibition match against Juan Martin del Potro at New York's Madison Square Garden on 4 March before heading to Indian Wells.