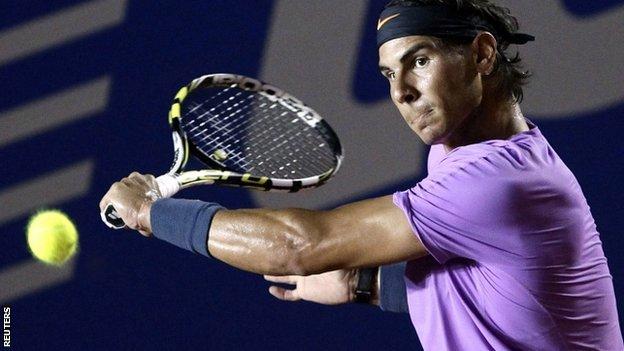 Rafael Nadal said his injured knee is improving after beating Argentina's Martin Alund 6-0 6-4 to reach the quarter-finals of the Mexican Open.

The Spaniard, 26, was playing his 10th match on clay since returning from a seven-month injury lay-off.

He finished runner-up at the Chile Open before winning the title in Sao Paulo two weeks ago.

The first set was very, very good, perhaps the best one in the tour so far

"For the last three days, the feeling [in the knee] is so much better," said the 11-time Grand Slam champion.

"I'm able to compete with a fairly acceptable condition, something that I didn't feel in Chile or Sao Paulo. It's a big improvement for me, it gives me hope and motivation to keep on going."

Nadal needed just 85 minutes to beat Alund and will now face another Argentine in Leonardo Mayer.

"The first set was very, very good, perhaps the best one in the tour so far," said Nadal.

"I'm really happy with the way that I competed in that first set. In the second one I got a little bit tired and it was an even match before he made some mistakes for me to win it."

Nadal is scheduled to play his first hard-court events in Indian Wells and Miami next month but will make a final decision once he is finished in Acapulco.