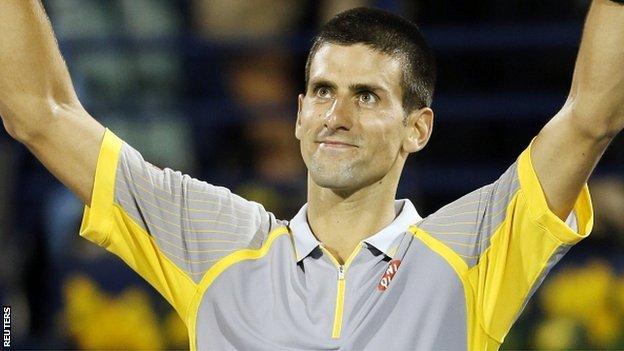 Novak Djokovic and Roger Federer remain on course for a final showdown at the Dubai Championships after both men powered into the last four.

Second seed and defending champion Federer was similarly impressive as he swept past Nikolay Davydenko 6-2 6-2.

Berdych beat Russia's Dmitry Tursunov 6-3 6-2 and Del Potro saw off Daniel Brands of Germany 6-4 6-2 in the other quarter-finals to ensure the top four seeds made it through to the final four.

Djokovic is trying to win in Dubai for the fourth time in five years and has a 7-2 record against Del Potro, including their last three matches, but expects a tough test on Friday.

"Del Potro is a fantastic player," said the Serb. "He's very powerful and has a great serve. He likes this court, plays very aggressive, so I'll have to be on top of my game."

Del Potro won the US Open in 2009 but then suffered a serious wrist injury, which is still troubling the 24-year-old.

"I need to be ready for tomorrow. And I will have the rest of the day to recover in my wrist and do the best what I can. I know against Djokovic I need to hit my backhand 100% and then see if I have a little chance to win."

Federer described himself as "very happy" with his form after his 19th win in 21 meetings with fellow 31-year-old Davydenko, but like Djokovic he expects a significantly harder time on Friday.

"He's got amazing power, one of the strongest guys out there on tour," Federer said of Berdych.

"I've struggled somewhat against him, but very often it's because his game is so big that, you know, he has a big say in the outcome of the match."