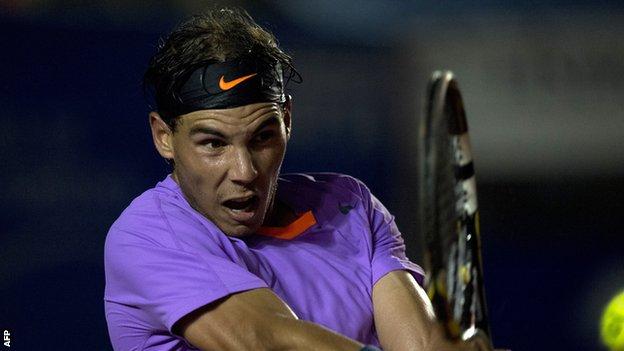 Rafael Nadal beat Argentina's Leonardo Mayer 6-1 7-5 to reach the Mexican Open semi-finals as he continues his comeback from a knee injury.

The Spaniard, 26, was playing his third tournament in four weeks since returning from a seven-month lay-off.

14 July 2012: Pulls out of an exhibition match with Novak Djokovic because of tendinitis

The 11-time Grand Slam champion was runner-up at the Chile Open before winning the Brazil Open two weeks ago.

"This was a very difficult match. Leonardo was playing really well in the second set," Nadal said.

"He began to play more aggressive and his serve was working well."

Nadal breezed through the opening set of the quarter-final but had to survive two break points in the third game of the second on his way to victory.

He next faces the toughest test of his comeback to date against compatriot and two-time Acapulco champion Nicolas Almagro, with top seed and world number four David Ferrer a potential final opponent.

"I don't feel like the favourite for tomorrow," said Nadal. "It's been seven months without competing and I will be facing a great clay player.

"I will do my best to play a great match to reach the final, it's that clear."

Despite continuing to experience pain in his knee, Nadal remains scheduled to play the upcoming hard court Masters Series events at Indian Wells and Miami, but will make a final judgement on that after Acapulco.

"So far I've played in three semi-finals and that's fantastic news, and it's even better because my three best games have been here," he said.

"Now I feel like I have nothing to lose no matter what happens tomorrow. Either I will go on to play the final or I will go happy to play in another tournament knowing that the knee is responding better."