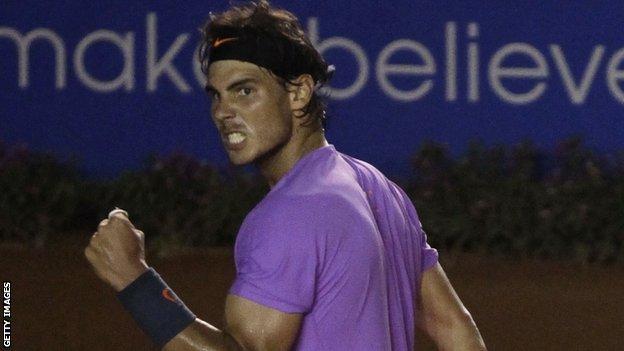 Nadal, who has only recently returned from a seven-month injury lay-off, will face defending champion and top seed David Ferrer of Spain in the final.

The 11-time Grand Slam champion was runner-up at the Chile Open before winning the Brazil Open two weeks ago.

He was ruthless against Almagro, who dropped serve just twice in the match, to wrap up a 7-5 6-4 win.

Nadal will now go in search of his 38th clay-court title against his compatriot Ferrer, who has won 19 consecutive matches in the Acapulco event and is looking for his third title of the year.

Nadal said: "It's a very, very happy moment for me to be in another final, three in a row now since coming back. It's something I couldn't think of before the start of the season because I really didn't feel very well with my knee.

"This week has been very emotional for me. I'm starting to feel freedom to run for almost every ball, so that's the best possible news for me and I'm enjoying the tennis."

Looking ahead to Sunday's final against Ferrer, who recently overtook him to become the world number four, Nadal added: "It is going to be probably the toughest match that you can expect today on clay, because he's amazing and one of the players of the moment.

"I will try my best but I know after seven months it's going to be very difficult to win."

The 30-year-old Spaniard saved three break points in the opening game of the third set before powering to victory.