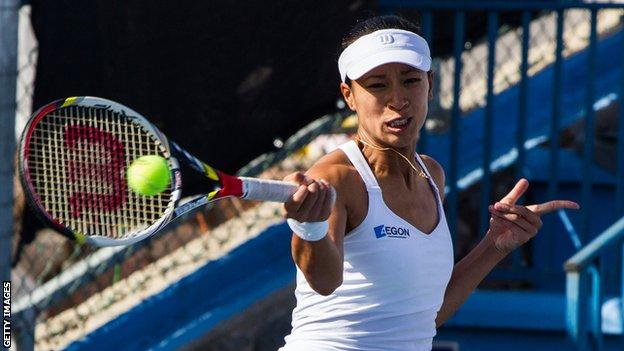 Anne Keothavong missed out on winning her maiden WTA title when she and her doubles partner Valeria Savinykh were beaten in the final of the Brazil Tennis Cup.

In the singles event, Venus Williams, 32, was beaten by world number 109 Olga Puchkova in the semi-finals.

"I gave my best but just couldn't play consistent enough today," said the American. "She played so well, it was hard."

Keothavong had made it to seven singles and two doubles semi-finals on the WTA tour before finally getting to a final in Florianopolis on Saturday.

"It's only taken me 10 years to make a damn final!" Keothavong told the WTA website.

"After so many semi-final losses, it was great to finally have a chance of winning a WTA title with Valeria but I guess it wasn't to be tonight. Anabel and Slava are both Grand Slam doubles champions and they played the bigger points better than us."

She added: "Overall, it's been a fun week playing with Valeria and we've got to know each other better, she's a great girl to be around.

"We're both smiley, happy people and easy to get on with and that worked for us as a team this week."