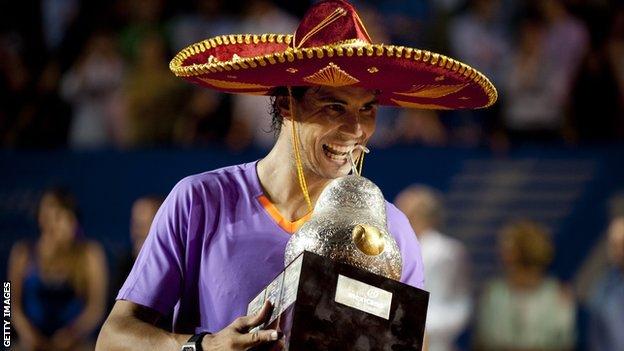 Rafael Nadal comfortably beat David Ferrer in the Mexican Open final to win his second tournament since recovering from a serious injury to his left knee.

The Spaniard spent seven months out of tennis but has now won two events in three weeks after also claiming the Brazil Open title in February.

"I've had some difficult months, especially during my time away from tennis, but I feel good," said Nadal.

"I have to thank my family and everyone involved in my rehabilitation. It has been a difficult time over the last few months."

He won 81% of his first-serve points against Ferrer and saved both break points he faced.

Nadal has now won 12 of his 13 matches since returning to the sport after recovering from a torn tendon and maintained his record of never losing against a Spanish player in a final.

"I want to congratulate Rafa. He is not an easy player to beat," said world number four Ferrer. "If I have to lose I am happy to lose to Rafa."

Nadal also confirmed he would play in next week's Indian Wells hard-court tournament in America, despite speculation he might miss the event to protect his knee.

Before that he is scheduled to play an exhibition match against Juan Martin del Potro at New York's Madison Square Garden on Monday.

"My heart tells me I should continue competing, that I need to move on to the next tournament," he said.