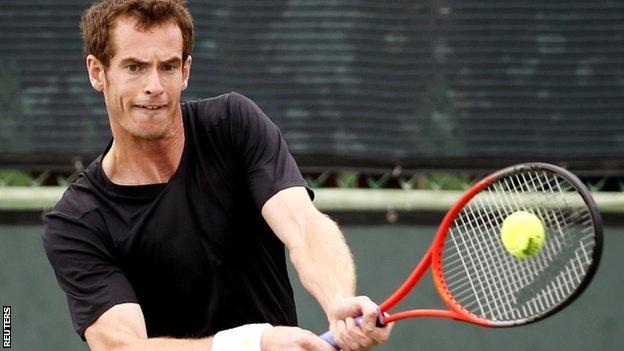 Andy Murray will return to action at Indian Wells this weekend with the world number two ranking in his sights.

The Briton could overtake Roger Federer in the rankings if he reaches the final and the Swiss falls before the semis.

Third seed Murray has a bye in round one and opens against Russian Evgeny Donskoy on Sunday.

The BNP Paribas Open will see Murray, Federer, Novak Djokovic and Rafael Nadal at the same tournament for the first time since Wimbledon last summer.

Nadal was out for seven months with a serious knee injury before and Indian Wells will be the first test of his knee on the more punishing hard courts.

The Spaniard will play American Ryan Harrison in his first match on Saturday and, having slipped to fifth in the rankings, could face Federer as early as the quarter-finals.

Federer faces Denis Istomin from Uzbekistan in his opening encounter.

World number one in tour matches and opens against Fabio Fognini or Aljaz Bedene in Indian Wells, with Murray a potential semi-final opponent.

The Scot will be playing for the first time since losing to Djokovic in the Australian Open final in January.

Fellow Britons in the first round of the women's draw on Thursday.

Victoria Azarenka is the top seed in the absence of Serena Williams, and the Belarusian could face Slovakia's Daniela Hantuchova in the second round.

Williams and her sister Venus have boycotted the Indian Wells tournament since 2001, when Serena was booed in the final after Venus had pulled out of a semi-final with her sibling, citing injury. Their father, Richard, felt they were the victims of racial abuse during the final.

As one of the WTA's premier mandatory events, the Williams sisters are open to being fined for refusing to play, and tournament director Steve Simon confirmed they have made "some significant sacrifices for not being here".

Speaking to BBC 5 live sports extra, Simon added: "I don't think you ever say it's a lost cause. We have had communications with them over the years, many times, and we actually get along very well with them.

"They unfortunately had, in their minds, a bad experience here and have decided not to come back, but they know that they are welcome here and we get along famously.

"But they've got their reasons for not wanting to do it, and that's the way it is."