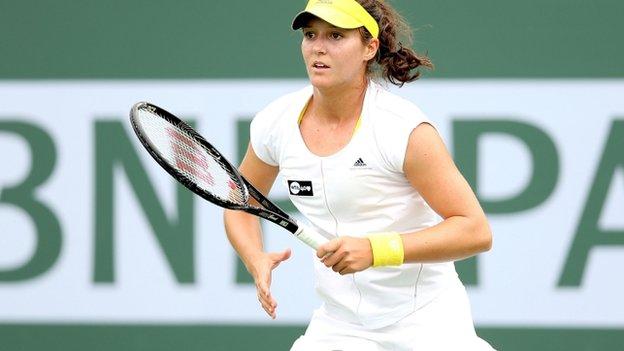 Laura Robson and Heather Watson both suffered first-round defeats on a bad day for Britain's women at the BNP Paribas Open in Indian Wells.

A check to the progress of Watson and Robson who for all their promise, and the achievement in getting this far, are both struggling right now.

Robson, who has lost three first-round matches in succession, was dejected as she tried to analyse her defeat to Arvidsson from a commanding position.

Not much analysis required: she just couldn't keep enough in the court. A real shame because she had played so freely in the early stages.

Watson's demise was strangely straightforward and it was unusual to see her struggling to reach balls struck by Begu, her Romanian opponent.

At 39 and 43 respectively, Watson and Robson have rankings to be proud of. But as current results are proving, things are only going to get tougher at this level.

Andy Murray will return to action when the leading men begin their campaigns at the weekend.

Watson, 20, is currently at a career-high ranking of 39 in the world but it did not show against Begu, ranked 53rd and with only two wins in 2013 coming into Indian Wells.

The Romanian, 22, broke twice in each set, saving five break points in the second as Watson put the pressure on, to prevail in one hour and 43 minutes on Court Three.

"I didn't really play well but my opponent is a great player and I feel like these courts really suit her game, and she played very smart. I wasn't really able to keep many balls in play. I wasn't really there today."

She added: "I feel the courts are just very different, like a clay court - they're very, very slow and it bounces very high here."

As that match finished, Robson was already well set over on Court Two as she eased into a healthy lead, and the 19-year-old looked on course to put recent back-to-back defeats in Doha and Dubai behind her.

However, Arvidsson, 29, is ranked just six places lower than Robson at 49 in the world and had won their only previous match in the Fed Cup last April.

As Robson's serve began to let her down, the experienced Swede took advantage, reeling in the Briton and then dominating the tie-break, before racing away with the decider.

Both Robson and Watson will now head to the Sony Ericsson Open in Miami, which begins on 19 March.