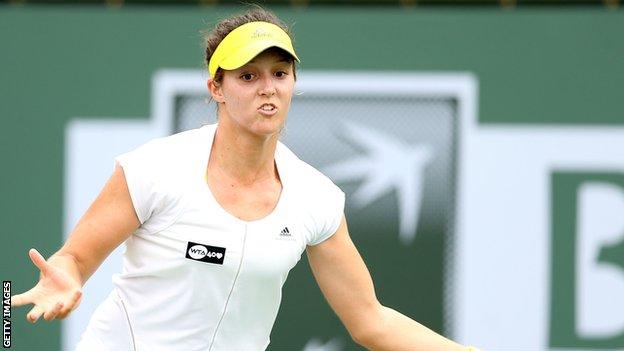 Laura Robson says she is disappointed after defeat in Indian Wells gave her a third consecutive first-round tournament exit.

"It was especially disappointing for me today because I really felt for the first time this year I was hitting it well," said the 19-year-old.

Her latest defeat follows first-round exits in Dubai and Qatar in February.

Robson, who has been struggling with a chest infection since the Olympics, conceded her recent troubles were a factor in her latest defeat.

She let a 4-1 lead slip in the second set before being dominated in the deciding set, winning just one game.

"I would say a little bit more nervous than normal - when you go through a tough patch it is hard to get the first win back and I really wanted it today," said Robson.

"That maybe made it a bit worse."

Robson has risen to world number 43 this year and reached the third round of the Australian Open - her best effort in Melbourne.

She also helped Great Britain secure a Fed Cup World Group II play-off after success in the Euro/Africa Group I play-off against Bulgaria.