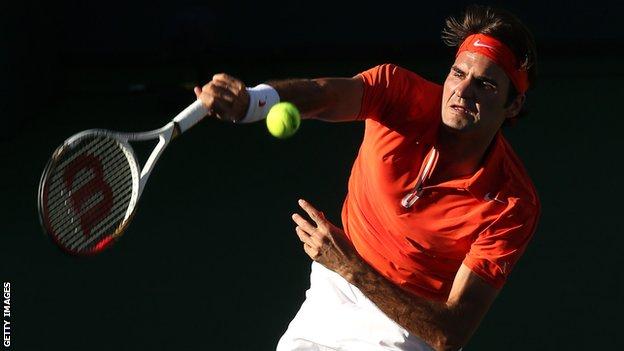 Roger Federer and Rafael Nadal remain on course to meet in the Indian Wells Masters quarter-finals after both reached the last 16 in California.

Swiss star Federer, ranked second in the world, beat Croatia's Ivan Dodig 6-3 6-1 in the third round.

"For the first few seconds, I wasn't sure what was happening. I ran outside. I was at the house and didn't know how long it was going to last. Thank God my family wasn't in the house."

Spaniard Nadal progressed on a walkover as Argentine opponent Leonardo Mayer withdrew because of a back injury.

Former world number one Caroline Wozniacki eased to a 6-2 6-1 win over Elena Vesnina, while Angelique Kerber and Sam Stosur also advanced to the fourth round.

Federer, a four-time champion at Indian Wells, had to overcome a back problem to defeat Dodig in 61 minutes.

But he is not worried that it could affect his fourth-round match against Swiss Davis Cup team-mate Stanislas Wawrinka on Wednesday.

"I felt a little something in my back at the end," the 17-time Grand Slam champion said. "I'll just have to check it out. Hopefully I'll be fine."

Dodig, ranked 60th in the world, brought up three break points in the first game of the match, but Federer won five points in a row to hold.

The former world number one was given a break in game eight as Dodig served two double faults, and went on to claim the opening set.

He then twice broke in the second set for a 3-0 lead, and even though Dodig won his next service game, Federer powered through.

Nadal will face Latvia's Ernests Gulbis for a place in the quarter-finals after his walkover victory.

The former world number one was due to face Mayer in the third round on Monday, but the Argentine withdrew minutes before warming up.

"That's bad news, for sure, for the fans and for Mayer, especially," said Nadal. "I talked with him. It seemed like it's nothing very, very bad."

Federer and Nadal have had little trouble on court at Indian Wells so far, but both admitted to being shaken by a nearby earthquake on Monday.

The quake, which measured 4.7 on the Richter scale, struck deep beneath a mountain range just before 17:00 GMT, around 22 miles south of Palm Springs.

Federer said: "For the first few seconds, I wasn't sure what was happening.

"Thank God my family wasn't in the house."

The Spaniard's next match is on Wednesday against Latvian qualifier Gulbis, who beat 20th seed Andreas Seppi 5-7 6-3 6-4 in two hours and eight minutes to reach the last 16.

Britain's Andy Murray meanwhile, is free to concentrate on the singles after he and brother Jamie were beaten 6-3 7-5 in the second round of the doubles by Treat Huey of the Philippines and Poland's Jerzy Janowicz.

The US Open champion faces Yen-Hsun Lu of Chinese Taipei in his third-round match on Tuesday.