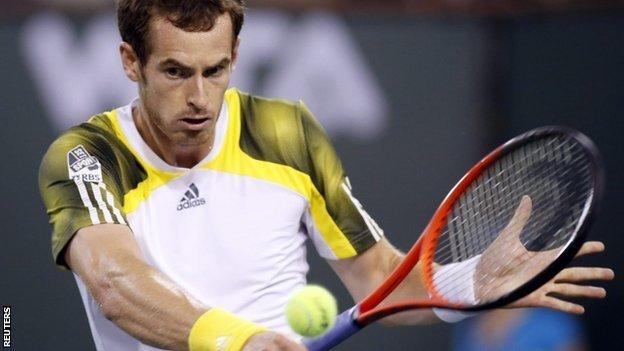 British world number three Andy Murray cruised into the fourth round of the BNP Paribas Open with a straight-sets win over Taipei's Yen-Hsun Lu.

The US Open and Olympic champion broke twice in each set to win 6-3 6-2 in one hour and 28 minutes in Indian Wells.

Murray, who is on course to face world number one Novak Djokovic in the semi-finals, faces Argentina's Carlos Berlocq, ranked 85, in the last 16.

"With billionaire Indian Wells owner Larry Ellison, the third richest man in America, watching from the front row, Murray delivered a solid, patient performance which improved with time. Talented opponent Yen-Hsun Lu came out firing, forcing early break points, with one running forehand winner a contender for shot of the tournament so far. But Murray served well to escape from those tricky situations and the longer the match went on, the better he played. He won the final four games to take his place in the last 16 where he'll start strong favourite against Carlos Berlocq of Argentina. In keeping with his performance, Murray then sped into his press conference - seemingly showered and revived - in record time."

Lu, who beat Murray in the first round of the Beijing Olympics in 2008, started the brighter of the two, making a series of big shots to create five break point opportunities in the first set.

However, Murray saved them all and created two of his own, sealing the set courtesy of a Lu double fault.

The opening games of the second set were closely contested before Murray broke to love in the sixth game to lead 4-2 before mopping up the next two games to clinch the match.

"It was a tough match," said Murray. "He's caused a few upsets over the last couple of years. He takes the ball extremely early, hits the ball very flat and really goes for it.

"If he's striking the ball cleanly like he was at the start he can hit a lot of winners.

"He can kind of leave you flat-footed sometimes, and he certainly did that a lot in the first set. I knew it was going to be a tough encounter, so it was good to win in straight sets."

The Serb, unbeaten in 2013, trailed 4-1 in the opening set before battling back to sweep aside his 21-year-old Bulgarian opponent in 67 minutes.

"I just tried to stay positive and calm and hang in there and wait for the chances," said Djokovic. "So that's, I guess, the biggest positive I can take out of today's performance."

Frenchman Jo-Wilfried Tsonga booked his place in the fourth round with a straight sets win over American Mardy Fish, the 32nd seed.

Tsonga will play Milos Raonic, who beat Marin Cilic 3-6 6-4 6-3, while Juan Martin Del Potro of Argentina and German Tommy Haas both secured victories to set up a clash in the fourth round.

In the women's draw, Russian second seed Maria Sharapova eased to a 7-5 6-0 victory over Lara Arruabarrena-Vecino of Spain to set up a quarter-final with Italian sixth seed Sara Errani.

The Belarusian will play former world number one Caroline Wozniacki after the Dane beat Nadia Petrova in straight sets.

Australian Sam Stosur and German Angelique Kerber both secured wins to set up a last-eight tie.