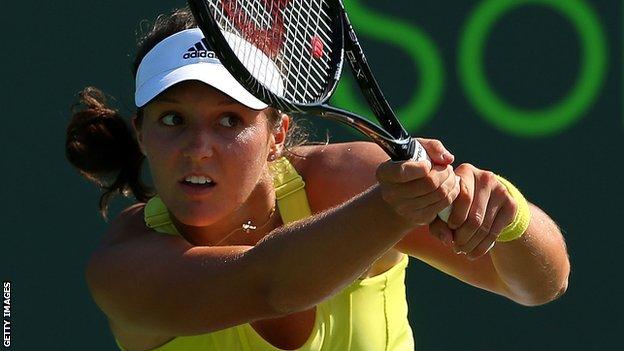 Britain's Laura Robson beat Camila Giorgi, of Italy, 6-2 4-6 6-3 to reach the second round of the Miami Masters.

The world number 43 looked set for a comfortable victory when she won the first set in just over 20 minutes.

But Giorgi, who has not won a match this year, fought back to win the second set before Robson finally triumphed in an error-strewn third set.

The 19-year-old will now play number 32 seed Alize Cornet, of France, who was given a bye in the first round.

Robson's victory - secured moments before a thunderstorm suspended play on all courts - was her first since the Australian Open following three first-round defeats.

"I'm really happy with the win today," Robson said. "It was so hot when we started the match and by the end, there was this huge storm coming. I was trying to win before it started.

"I was going for a bit more on my second serve and not taking as long in between points as I usually would do. We were very lucky to finish before it started pouring 30 seconds later."

In the men's draw, Australian wildcard Lleyton Hewitt reached the second round with a 6-1 7-6 (7-3) victory over Portugal's Joao Sousa.