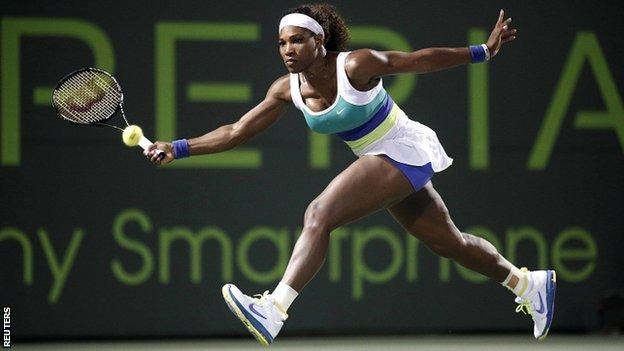 Top seed Serena Williams beat Japan's Ayumi Morita 6-3 6-3 in the Miami Masters after beating the traffic by riding to the match on a bicycle.

The American, 31, feared she would be late and said: "Riding to the match was probably one of my best memories ever."

Meanwhile, Serena's sister, Venus, pulled out of the competition with a back injury before her third-round match against American Sloane Stephens.

"But I have faced disappointments in my life and my career. It's not the first; probably not the last."

Serena, who is aiming to win her sixth Key Biscayne title, came through her third-round encounter after the evening traffic made her fearful that she might be late.

"The traffic was crazy and everyone was like, 'I have been here for an hour, and I'm staying like eight minutes away',' 15-time Grand Slam champion Williams said. "I'm like, 'OK, I'm not going to make my match'.

"So I asked for a golf cart, and the hotel didn't have a golf cart. Then they were like, 'We have a motor bike'. I'm like, 'I don't do motor bikes'.

On her sister's withdrawal, Serena added: "I think it was the right decision for her. I haven't seen her really on the practice court as much because she wasn't feeling great, so I think she's taking everything a day at a time."

And fifth-seeded Li Na of China held on for a 6-2 6-4 victory over American Varvara Lepchenko.