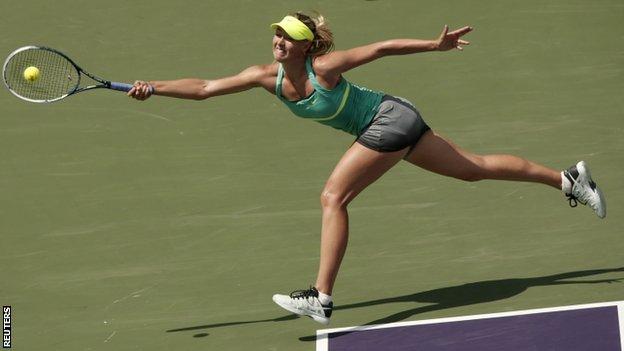 Maria Sharapova continued her fine recent form as she saw off Elena Vesnina to reach the last 16 of the Sony Open in Miami.

Third seed Sharapova took one hour and 47 minutes to overpower her fellow Russian 6-4 6-2.

"You can always expect Tommy to fight and try his best,'' said Djokovic, seeking his fourth Key Biscayne title and third in a row.

"So I know what to expect. It's going to be a tough match.''

Sharapova, will next play Klara Zakopalova, who beat Maria Kirilenko 6-2 7-6.

"I personally love Miami," said Sharapova. "I've been coming here since I was a little girl.

"I've only had a few days to recover from Indian Wells but there's no greater motivation than winning."

Sharapova could regain the world number one spot from Serena Williams - who - depending on how the two go on this week.

The Russian, who has been runner-up in Miami on four occasions, has now won her last 15 matches against fellow Russians. She was broken in the first set but soon recovered to take a comfortable victory.

There was also a 7-6 6-4 win for former world number one Jelena Jankovic over Nadia Petrova.