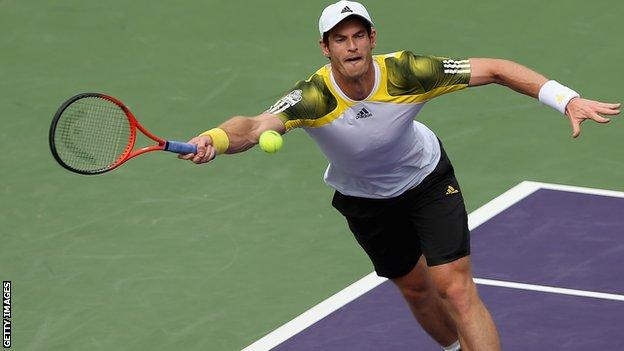 Andy Murray overcame a shaky start to beat Grigor Dimitrov 7-6 (7-3) 6-3 and move into the fourth round of the Sony Open in Miami.

The US Open champion lost his serve twice early on before saving two set points at 2-5.

Three double faults from Dimitrov in the next game allowed Murray back into the set, which he took on a tie-break.

Murray broke serve early in the second set and stayed comfortably ahead to clinch his place in the next round.

Dimitrov, the world number 32, made a confident start to break Murray's service early in the first set before repeating the trick to take a commanding lead.

"For 40 minutes, Grigor Dimitrov did his best Roger Federer impression, while Andy Murray looked a shadow of himself. But, like in Brisbane in January, Dimitrov failed to capitalise. This was worse, though, because he had two set points and should have won the second of them after lobbing Murray. He didn't and then hit three double faults when serving at 5-3. After that, Murray tightened up his own game and helped Dimitrov to beat himself."

But Murray held his nerve on two set points to thwart his opponent, who nervously sent down three double faults to give the Scot a foothold in the set.

The 21-year-old Bulgarian lost the set on a tie-break and then lost his serve in the second game of the next set.

Dimitrov then managed to save two match points on the Scot's serve but put a backhand into the net on the third.

"He was taking the ball early very aggressively and hitting very clean at the beginning of the match and I had to weather the storm a bit," said Murray.

"If you don't feel like you are playing at your best, you don't go for the lines, you just try to keep a good depth and hit the ball mainly crosscourt and make your opponent have to beat you. I did that in the first set."

Murray will face Italian world number 19 Andreas Seppi in the next round.

If he wins this tournament, Murray will move to number two in the world rankings, ahead of Roger Federer.