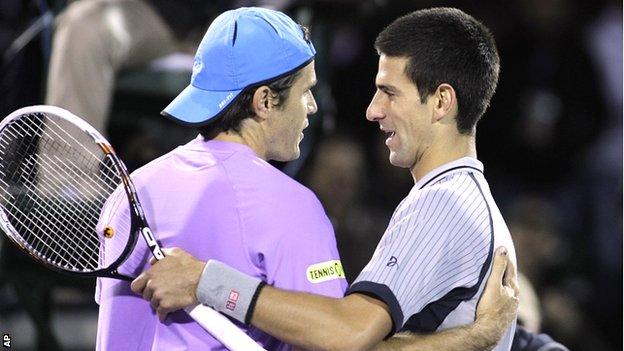 Novak Djokovic suffered a shock defeat by Tommy Haas in the fourth round of the Sony Open in Miami, leaving Andy Murray as the highest seed remaining.

Djokovic, the defending champion, was completely outplayed by his German opponent in a 6-2 6-4 loss.

Haas ended the Serb's 14-match winning streak at the tournament and inflicted only his second defeat of the season.

"This was a superb performance from Tommy Haas, an admirable player who will turn 35 next week and told me this week that it's these occasions that keep him going.

Haas has had five surgeries in his career, and last beat a world number one 14 years ago - Andre Agassi in 1999. His tactics, variety and single-handed backhand were a joy to behold.

As for Djokovic, he looked fine until 2-2, but it got colder and colder to the point where spectators were wrapped in blankets, and his game fell apart.

He won't worry unduly, but it shows that everyone is vulnerable on a given day. Great chance for Murray to get to number two now."

"As far as I'm concerned, it's definitely the worst match I have played in a long time," said Djokovic.

"It was quite cold and there was basically no air in the balls and a low bounce, which is more suitable to his style of the game.

"I needed to make much less unforced errors in order to win against a quality player like Tommy and I congratulate him.

"Definitely he made great tactics, used the serve well, moved around the court really well and was better."

Haas's victory was his first against a world number one since 1999.

The 15th seed's prize is a last-eight meeting with 11th seed Gilles Simon of France, who beat Serbia's Janko Tipsarevic in three sets.

and next plays Croatia's Marin Cilic, the world number 11. He will overtake Roger Federer as world number two if he wins the tournament.