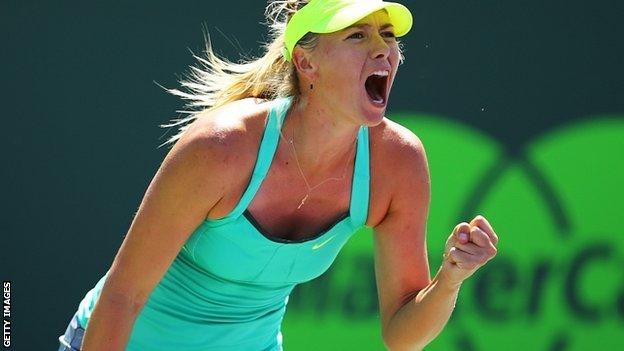 Maria Sharapova remains on track to win her first Miami title after a hard-fought win over Italy's Sara Errani.

The Russian, ranked second in the world, struggled on serve throughout, with 13 double faults among 57 unforced errors, but came through 7-5 7-5 to reach the semi-finals at the Sony Open.

David Ferrer battled back from a set down to beat Jurgen Melzer 4-6 6-3 6-0 and move into the men's semi-finals.

Sharapova, 25, was pushed hard by Errani and had to save a break point in a lengthy 10th game of the second set, before winning the next two games to seal victory in a punishing two hours and 29 minutes.

"I had a really difficult opponent," said the four-time Grand Slam champion.

"She really made me work for this match. A few ups and downs in the match but I'm really happy to get through."

Sharapova, who won at Indian Wells earlier this month, has finished runner-up four times in Miami, losing to Kim Clijsters in 2005, Svetlana Kuznetsova in 2006, Victoria Azarenka in 2011 and Agnieszka Radwanska last year.

"I've been so close to winning," she said. "I would love to win this. I've been coming to this tournament since I was a little kid. It would mean a lot to win it."

Tommy Haas returns to face Gilles Simon later on Wednesday. Andy Murray plays Marin Cilic for a place in the last four on Thursday, while Tomas Berdych will take on Richard Gasquet in the other quarter-final.